As an Apollo generation kid in the Washington D.C. area, Mark Matossian (AeroEngr MS ’93, PhD ’95) remembers watching the live moon landings on television, then wandering outside at night squinting at that very same celestial body, trying to see the lunar module. “That time ignited…wonder,” says Matossian, head of program management and production at Google’s Skybox Imaging. “It was then that I connected with space.”

And that connection partly grew through his time at CU-Boulder. “I came to CU for the Colorado Center for Astrodynamics Research, and the school was one of the best places in the country for astrodynamics,” says Matossian. “My focus was in the area of satellite constellations—networks of satellites working together. The director at the time was George Born, who was a giant in precision orbit determination—he was kind enough to take me in and give me a teaching assistantship. I was then able to secure my own NASA fellowship, which was pretty unheard of at the time.”

“These satellites are about the size of a dorm fridge with an excellent optical telescope inside,” he explains. “Instead of spending hundreds of millions on a single spacecraft, we can build many of these smaller spacecraft for a significantly lower individual cost.”

These small, high-performance satellites orbit the earth every 90 minutes, collecting numerous images of the same place every time they go by. Computers and smart algorithms are then used to analyze the images to detect changes or interesting phenomena. “This can be a big help for NGOs to insurance analysts and even commodities traders,” says Matossian.

“One of the really cool things that we were able to squeeze in is a space launch opportunity for some university ‘cubesats.’ These are very small satellites that essentially hitchhike to space on one of our rocket launches.” Matossian saw an opportunity for CU, but the timing was very tight. “We were really impressed.  The Laboratory for Atmospheric and Space Physics (LASP) and the Aerospace Engineering Sciences department quickly put together a fantastic proposal to launch their MinXSS FM-2 spacecraft for solar X-ray spectrometry observations.”

The MinXSS team is now looking forward to a ride to space with Skybox later this year. 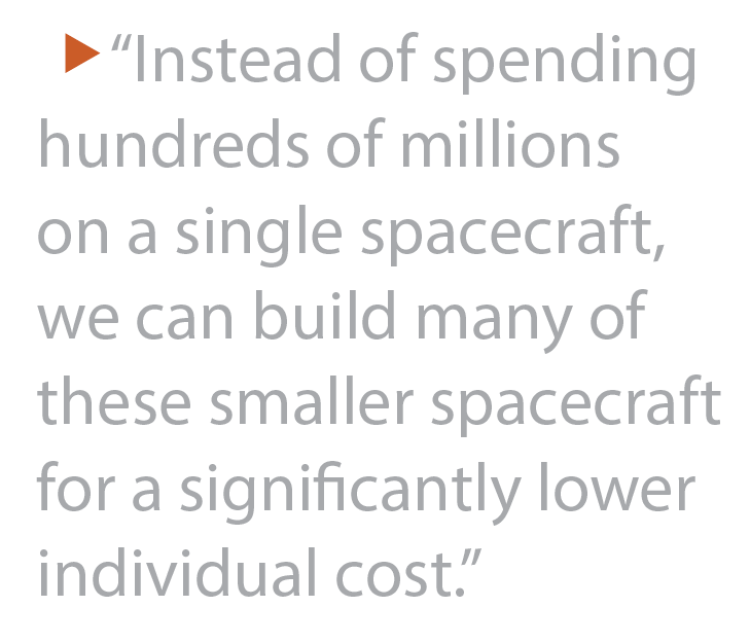 To Matossian, Skybox is also special because it is a landmark to the aerospace community. “It’s exciting because there is the traditional aerospace side of the community that can sometimes be very conservative, but there’s a little revolution going on where people are trying to grow these small inexpensive satellite efforts into greater capabilities,” says Matossian. “With the successful ‘exit’ of Skybox to a Google acquisition, Skybox is the first of these ‘New Space’ ventures to secure venture capital funds and validate that financing model for venture capitalists. Of course, now as part of Google, we are accelerating on the path to realize the vision of the venture.”

Matossian has worn a few hats at the famed search company—most recently working in the Google Access group as the senior program manager on a solar- powered UAV payload project. Previously, he had worked on highly proprietary product development efforts on the Android and mobile payments teams,   and his initial responsibility was for worldwide manufacturing of most of the IT equipment that fueled Google’s global data center expansion.

Matossian says his time at Google has been hard work but, admittedly, a great deal of fun and an experience he relishes. “It’s not for the faint of heart, but Google is on the cusp of many things changing our world. I’ve always wanted to be a part of efforts like that.”