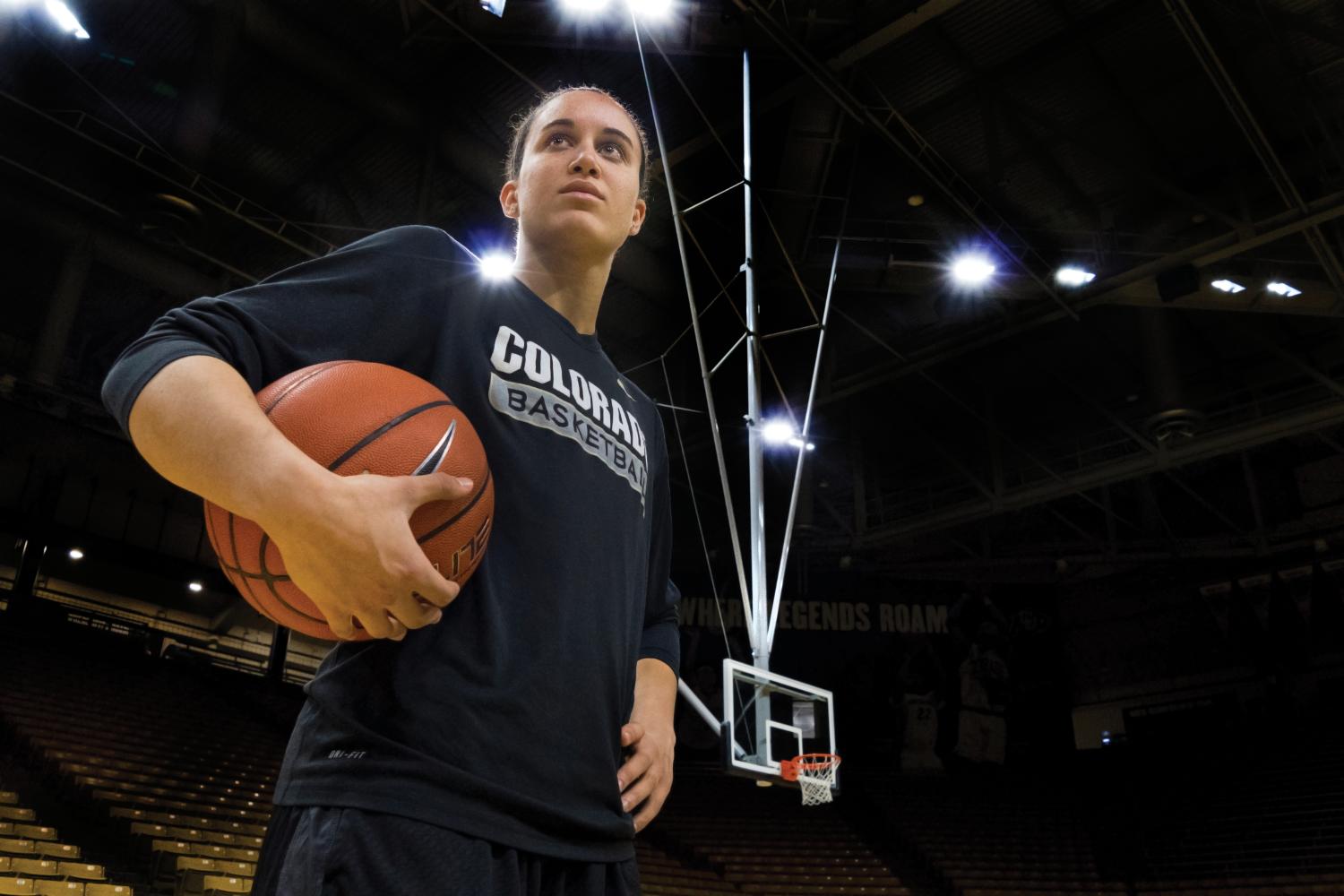 Twenty-six students in the College of Engineering and Applied Science are also NCAA athletes who compete in CU-Boulder sports. We checked in with five of them to see what it’s like to be in a demanding sport in the Pac-12 Conference while navigating through challenging engineering courses and projects.

An interest in math and science and how those subjects can be applied to the real world led Haley, from Sammamish, Washington, to major in mechanical engineering at CU-Boulder. After graduation she plans to pursue a master’s degree and take classes in biomedical engineering, in order to work in the field of prosthetic engineering. During her sophomore year, Haley started all 32 games, averaging 9.4 points and 5.4 rebounds per game. She led Colorado and ranked ninth in the Pac-12 in field goal percentage (.472).

How does basketball correlate with engineering?

In my dynamics class we analyzed the projectile motion of a basketball shot. This is something I deal with all the time and my body does automatically, but it was cool to see the mathematical analysis that one can use to perfect it. One of my favorite moments when competing is right after the opening tip. The court is just alive with energy and everyone is incredibly excited to get the game underway.

In the engineering projects class I worked on a project where my team had the Longmont Fire Department as a client. They had the issue of having to keep a firefighter stationed at corners to shuffle the hose around. My team designed a stand as a solution to the problem and machined the whole project. It was really cool to have an actual client with a real need and having the responsibility of meeting their needs.

Ethan grew up in Westminster, Colorado, and graduated from high school in Broomfield. Now in his sophomore year, Ethan is studying environmental engineering. He hopes to make a difference in the quality of life of people around the world, as well as to tackle the most pressing problems facing the world. A significant engineering team project he has worked on involved designing and constructing a device to dry people’s feet on snowy days. Due to an injury and a redshirt during his freshman fall semester, Ethan has only competed twice in college so far.

How do you balance sports with studying?

Both engineering and running require exceptional discipline. Success does not come all at once; it requires patience and hard work—to gain knowledge and skill, and to gain fitness. It’s been important to take charge of my own schedule. After practice I head to the training room to recover and then up to study hall to get homework done and meet with tutors. It’s all about personal responsibility and time management.

It’s an honor to run for the best cross country program in the NCAA. Although I have yet to compete as a scoring member of the team, I have been able to watch and learn from a group of the very best runners in the country. When my turn comes, I’m confident I will be prepared.

Because Connor, who hales from Centennial, Colorado, likes working with his hands, solving problems and building things, he chose mechanical engineering as his major. After graduation he plans to work for an engineering company that “builds cool new projects” and to someday start his own company and “build cool products for customers.” Running and engineering have taught Connor the discipline to put in the necessary study hours and miles to be successful—and that the rewards are worth the sacrifice. Connor is a two-time All-American on the cross country team, and ran a sub-4-minute mile this spring for the track team.

Why are you running cross country for CU?

It’s an honor to run for CU. We’ve had the opportunity to carry on the storied tradition of success and it is humbling. I have made lifelong friends and memories here at CU and I will cherish them for the rest of my life. I also like that we were able to create a culture of success that future classes can build on. My favorite moment while competing for CU was winning a national championship and my first [NCAA] All-American title.

What did you learn from your senior design project?

We were given $50,000 worth of parts and components to create a final product that worked and we delivered it to the company. I learned a ton about pumps, heaters, electrical, programming, valves and a whole lot of skills. The project was [chosen as] the senior design projects champion.

Ben, who comes from Salt Lake City, Utah, is studying engineering physics because he likes physics and wants to know how it can be practically applied to solve a problem. After graduation and graduate school, Ben wants to work for a company that is heavily in the realm of physics and computer modeling. He finds quantum computing and computer modeling fascinating. Ben’s honors include 2014 All-America First Team (indoor 5K), 2014 All-America Second Team (outdoor 1,500) and CoSIDA Academic All-America Third Team.

Has there been a school project you particularly liked working on?

I was in a computer science design project class over the summer and we came up with an idea, went through the design process cycle and developed a mid-fidelity design for a mobile application through which people could find free tutors on campus. It was fun trying to implement our application and challenging because it required a lot of thinking about how we were going to solve the design flaws within the app.

How do you manage your time with your busy schedule?

If I mess up planning or lag behind on work, it will catch up with me later. My teammate Connor Winter told me in my freshman year, “If you aren’t ahead [on your work], you’re behind.” That’s really stuck with me.

What’s it like to run cross country for CU-Boulder?

It’s probably the hardest thing I’ve ever done, but also the most rewarding. Our coaches, Mark Wetmore and Heather Burroughs, are amazing and so committed to helping us become the best we can be. My teammates are great. It’s fun to train with girls who really care about running and are constantly pushing  each other—and me—to become better.

How does engineering correlate to running?

Because of the dedication you have to both. You can’t be a good runner unless you are completely dedicated to your training, just like you can’t do well in engineering if you aren’t dedicated to your studies. I’ve found the best way to balance sports with studying is to stay on top of my work and not procrastinate.

On the Grid
END_OF_DOCUMENT_TOKEN_TO_BE_REPLACED
Return to the top of the page