Her impressive final resume includes two stints as department chair, literally writing the book on high-performance computing for undergraduates, and co-founding the Rocky Mountain Celebration for Women in Computing.

Recruitment and retention of women in computing has always been a focus for Jessup. When she came to CU Boulder in 1989, she was the only woman faculty member in computer science, and one of just four in the College of Engineering & Applied Science.

The number of women PhD students wasn’t much better at the time. “I started to hear rumbling from the female PhD students that they felt really isolated and lonely,” she said.

So Jessup invited them to her house for dessert, which led to regular informal social gatherings for all female faculty and graduate students. And that was just the first step. 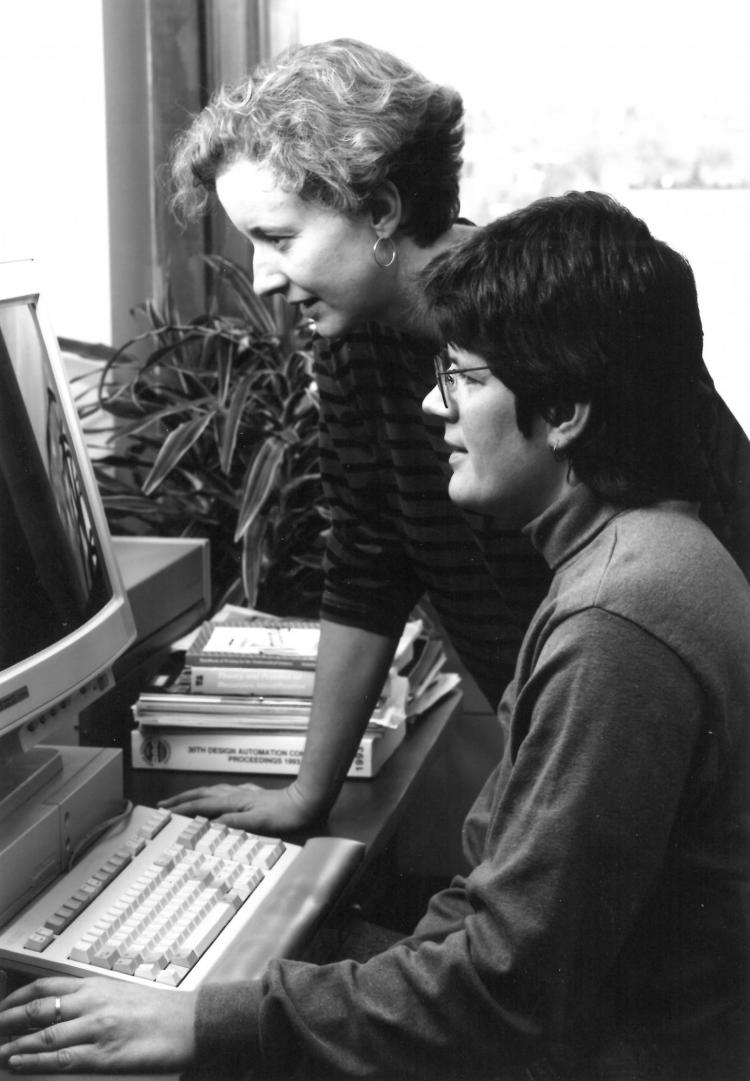 Liz Jessup and Liz Bradley work on a project in the 1990s.

A few years later, Jessup was involved in initial discussions about the National Center for Women and Information Technology, chartered in 2004 as a community for organizations looking to increase women’s participation in computing. In 2008, she co-founded the Rocky Mountain Celebration of Women in Computing, which has been held every two years since and draws hundreds of students and researchers, as well as industry professionals.

When she started her second term as chair of computer science in 2017, Jessup realized the department needed to step up its focus on recruiting women. In looking through their faculty roster, she found they had several women instructors and full professors, but no women at the junior faculty level.

She brought up her findings at a department meeting, and encouraged her colleagues to personally invite women to apply when they opened the next faculty search. Within a year, they had hired five female assistant professors.

“Everyone got really engaged and went out and beat the bushes to get women to apply,” she said. “We still hired two more men before we hired a woman, but we did turn it around once people had their eyes opened to the situation.”

Incoming department chair Ken Anderson said Jessup was part of the reason he got involved with diversity efforts in computing, including the NCWIT Aspirations in Computing program and the development of the Bachelor of Arts in computer science at CU Boulder.

“I credit Liz with helping to develop my passion for inclusion and diversity,” he said. “She’s the one that started me down this path toward leadership roles in the department, and I will always be grateful.”

A Place for Collaboration

Jessup hadn’t initially planned a career in academia. She earned her PhD in computer science from Yale University, despite starting her doctoral career in applied physics.

“I became a PhD student in computer science with virtually no education in computer science,” she said. “I knew how to program a calculator, and I had written about 20 lines of BASIC. I didn’t really know anything about computing other than this one class I was taking.”

But that numerical computation course had piqued her interest – an interest that would sustain her through a “sink or swim” first year in the program.

As she prepared to graduate, she wasn’t sure exactly what she wanted to do, but thanks in part to her experiences at Yale, she knew she wasn’t going into academia.

“In the years I was at Yale, there were no tenured slots available unless somebody died,” Jessup said. “Yale being Yale, they got the best young assistant professors to come there, and so they were all competing for this thing that didn’t exist. It led to a really ugly, competitive environment.”

Then she got a call from CU Boulder, asking if she’d be interested in interviewing for a faculty position.

The ski day at Copper Mountain went well, but during the interview, they asked what she thought was a trick question: Did she meet people here with whom she could collaborate?

“I was afraid to answer, because I was coming from this super-competitive background where collaboration wasn’t encouraged,” Jessup said. “Near the end of my visit, I had a meeting with Mike Mozer – at the time one of the most junior faculty members – and I asked him where the ugliness and backbiting was here. And he said, ‘It’s not here. It’s a really supportive place.’”

Three decades later, she leaves behind a faculty cohort still known for its friendliness and collaborative nature. After bringing on more than 20 new faculty members during her time as chair, she was hesitant to retire until she knew they had their feet under them.

Then, during the most recent faculty search, she asked candidates what they would like best about working here.

“All of this year’s candidates said something along the lines of ‘the best thing about working here would be how happy all the faculty are,’” she said. “And I thought, ‘OK, I can go.’” 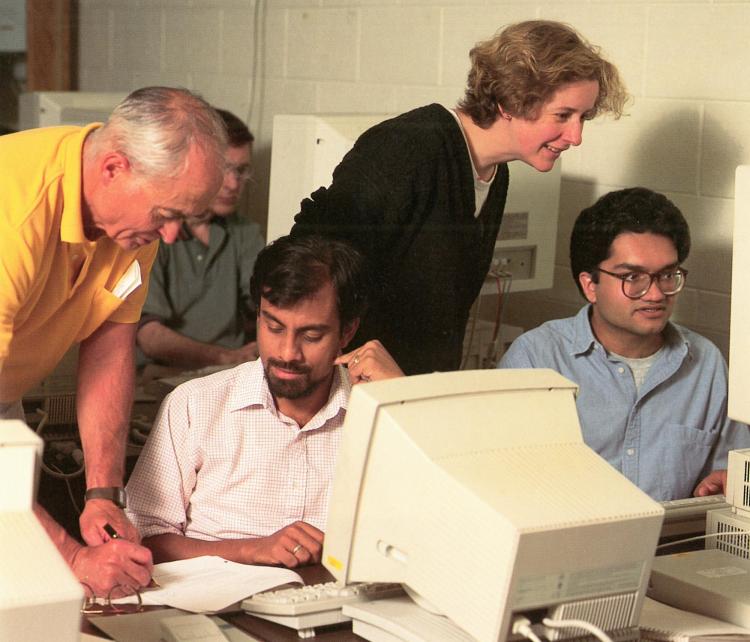 Jessup and Lloyd Fosdick lead a high-performance computing workshop in the 1990s.

As well as being an important leader for the department, Jessup will also leave a strong legacy in research and teaching.

Her work in numerical computation focused on algorithms and software for solving linear algebra problems, which are necessary in everything from building construction to computer games. Her research projects ranged from developing new algorithms for linear algebra computations to more recent collaborations with compiler developers.

Jessup and a former CU faculty member, Jeremy Siek, developed a programming language that would help to make linear algebra software work faster. She also collaborated on a tool that helps practitioners find the linear algebra software that they need, an effort aimed at making scientific computation as a whole faster and more affordable by making it more accessible.

“If you happen to need to solve a linear algebra problem on a computer and you go out into the software world, you find this tremendous mess,” she said. “It’s hard for people who aren’t computer scientists to make the best choice.”

Early in her career at CU Boulder, Jessup was also tapped by then-chair Lloyd Fosdick to help develop an undergraduate curriculum in high-performance scientific computing. The result was 1996’s An Introduction to High-performance Scientific Computing, the first textbook in that area designed for undergraduates.

“I feel like it made me a better computer scientists to have worked on this curriculum, and I learned a lot about education doing it,” she said.

While Jessup is tying up loose ends on one final grant and will continue to serve on the steering committee for the Rocky Mountain Celebration for Women in Computing, she’s mainly looking forward to the freedom of retirement.

During her retirement celebration, she rattled off a list of trips she’s planning, from biking tours to international travel. She’ll also be glad to spend time with family without academic deadlines hanging over her head.

But she said she’s leaving the department in good hands, including the next generation of researchers and teachers she helped bring on as chair.

“My proudest moment as chair was finally signing the last of the 30 offer letters that got us the 19 new faculty members in one year,” she said. “I think it’s been a really positive change for the department, getting all of those young people who bring a new energy and really diverse and interesting new research areas.”

Bobby Schnabel was on the faculty when Jessup was hired in the 1989. More than 20 years later, she hired him to return to CU Boulder to serve as external department chair.

“Since joining us 30 years ago,  Liz has had an outstanding career as a dedicated and inspiring teacher, a successful author and researcher, a leader in national professional organizations and, on two occasions, chair of the CS department,” he said. “We are very grateful for her many contributions, congratulate her on a wonderful career, and wish her the best for the coming decades.”