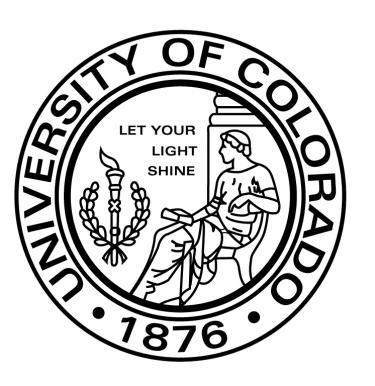 In its history, the University of Colorado has used three different seals. The current seal, adopted in 1908, depicts a male Greek classical figure sitting in front of a pillar and holding a scroll. Next to the figure, laurel branches frame a burning torch. The inscription in Greek reads “Let Your Light Shine.” The seal’s designer, Henry Read of Denver, chose the classical motif because Greek civilization “stands as the criterion of culture.” The laurel symbolizes honor or success; the youth suggests the “morning of life”; and the scroll represents written language.

From 1893 to 1908, the university seal was a copy of Wyon’s medallion, “Science Trims the Lamp of Life.” In this version, a Greek woman knelt before a lamp, and stalks of mariposa lilies decorated the border. Before 1893, an adaptation of the Colorado State Seal was used, but it was never adopted by the Board of Regents.

The seal is used primarily on official documents, such as diplomas and transcripts that have been issued on behalf of the university. The Board of Regents uses the seal on its official documents and publications. The seal also appears on the President’s Chain of Office, the University Mace, Regent regalia, and various formal publications.