The Presidential Chain of Office and the University Mace were created by Mary Sartor, M.F.A., University of Colorado Boulder. Both were gifts to the university by Mr. and Mrs. David G. Hawthorn, Class of 1924.Colorado gold and silver are used in both pieces to symbolize the importance of these minerals to the history of the state. The chain’s gem stones also consist entirely of minerals from Colorado. 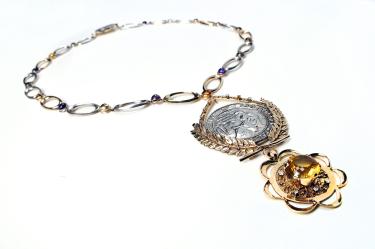 The Presidential Chain of Office

The chain, created in 1980 for the inauguration of President Arnold R. Weber, holds three suspended pendants. The back pendant is the seal of the state of Colorado surrounded by a golden ribbon representing the golden circle of knowledge. The top pendant in the front is the seal of the University of Colorado surmounted by an arch set with diamonds and topaz, signifying the necessary link between the search for knowledge and its practical application to the world beyond the university. The laurel wreaths that decorate the bottom of the seal symbolize honor and success. At the center of the bottom pendant is a gold topaz indicating humankind's quest for knowledge. The surrounding ring is paved with fragmented cubes and diamonds. 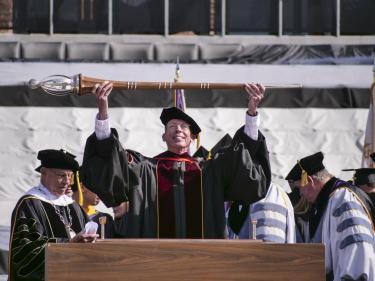 The mace was created for the commencement ceremonies of May 1984. The foot of the scepter is encased in sterling silver bound in 14-karat gold, ending in an intaglio of the seal of Colorado. The shaft of the mace was carved from a black walnut tree thought to have been one of the saplings given to the settlers of the Colorado Territory by President Abraham Lincoln. Sterling silver is also used in the crown, and the university seal is bound in gold and supported by an inner rod of gold surrounded by eight arching tapered silver ribs. At the base, the motto of the university, translated as “Let your light shine,” circles the crown in Greek characters. The wooden staff is bound at uneven intervals in gold and silver rings.