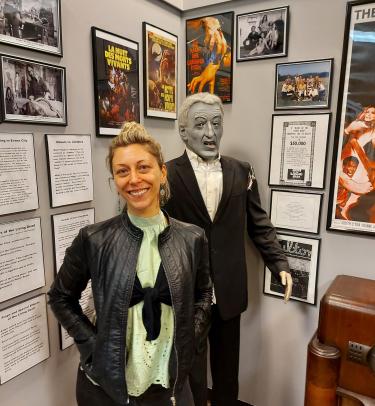 Sabrina Negri (Ph.D. 2017, University of Chicago) is an Assistant Professor in Cinema Studies, where she teaches Film History, Film Preservation, Narrative Analysis, Literature and Film: Detective Fiction, and The Cinema of John Carpenter. She wrote a book on John Carpenter’s They Live and is currently working on a book on film archival materials in the digital age. She presented at international conferences in the United States, Canada, and Europe, and has published essays on a wide array of scholarly journals such as the Journal of Cinema and Media Studies, Critical Inquiry, and Film Criticism. In 2021, together with Jamie Wagner from the University Libraries, she was awarded a $185.000 grant from the Institute of Museum and Library Services for the creation of a series of classes on media archiving and preservation.

“World War I Was Not in Black and White: They Shall Not Grow Old and the Status of the Digitally Restored Image." Imago 20/2019.

“I Saw, Therefore I Know? Alfred Hitchcock's The Wrong Man and the Epistemological Potential of the Photographic Image.” Film Criticism 41.1 (February 2017).