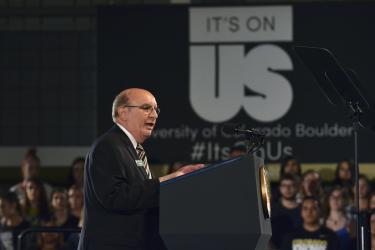 What a week it has been at CU-Boulder! On Monday we had Apple’s co-founder, Steve Wozniack on campus. Today, the Vice President of the United States!

I want to thank the City of Boulder for its support of all these events, including today’s visit of the Vice President. We are pleased to have the mayor, many elected officials, community leaders and several members of our Board of Regents with us today.

I want to particularly welcome our students and all those attending the Conference on World Affairs this week. It’s been a great week.

We are honored today to host Vice President Joe Biden. His presence affirms all of our campus efforts to prevent sexual assault and to support survivors. The Vice President’s visit brings further awareness to this vital issue.

As many of you know, we strongly embraced the Obama Administration’s It’s on Us campaign when it launched in the fall of 2014. It puts the responsibility on all of us, as citizens and community members, to help prevent sexual assault.

This campaign is part of CU-Boulder’s comprehensive education and prevention initiatives to combat sexual violence. And it compliments our efforts over the last two years to become a national model.

Two years ago we created a new Title IX oversight position. We hired an attorney from the U.S. Dept. of Justice to streamline procedures for investigating campus sexual assault, providing education, support services and making it simpler for victims to come forward.

Here’s where the University of Colorado Boulder stands:

We will be transparent at this university, releasing the data on sexual assault – and the data on what our students tell us their experience has been – which we just did in February. The survey showed us that we have more work to do, and it has motivated us to redouble our efforts.

My commitment to you is that we will be open and transparent on how we are doing, and that we will, as a community, become a leader in combating sexual assault among college students.

Vice President Biden’s appearance today on our campus inspires all of us to do more to address this national issue. All of us have the responsibility to stop sexual assault.

I have the pleasure of introducing Daymond John.

Today Daymond John is the face of American entrepreneurship, managing a multi-million dollar empire that encompasses fashion, media, and philanthropy. President Obama named him “Global Ambassador of Entrepreneurship” – an appointment that Daymond says he never could have imagined growing up.

Daymond started by sewing sweatshirts and hats in the living room of the house where he was raised by his single mom. That turned into his $6 billion clothing line FUBU –  For Us, By Us –that became synonymous with hip-hop.

He is co-star of the award-winning reality TV show Shark Tank, a celebrated pioneer in the fashion industry, a best-selling author and an inspiring speaker.