Good evening! Today we celebrate more than a decade of work. There are simultaneous celebrations tonight at the Lockheed Martin campus where MAVEN was built, and at our Laboratory for Atmospheric and Space Physics on the East Campus where MAVEN was conceived and developed. I'm so pleased to be with all of you here at Fiske Planetarium to celebrate. 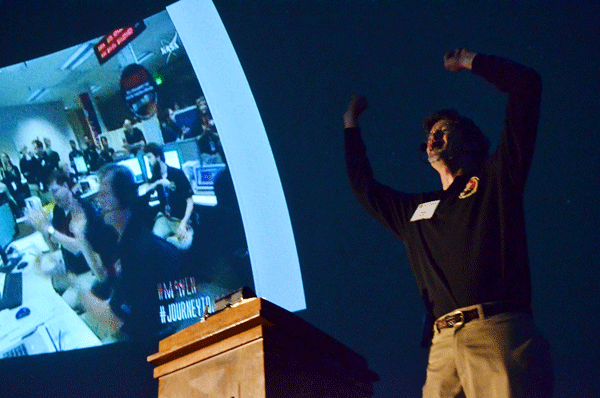 Nick Schneider celebrates the insertion of MAVEN into Mars orbit at 8:24 p.m. Sept. 21, 2014 during a live NASA feed before a crowd at Fiske Planetarium on campus.

MAVEN, of course, is not just CU's story. It's Colorado's story! And that's a beautiful thing. Nearly half of CU's $671 million NASA contract was returned to the Colorado economy.

Our MAVEN partners are all Colorado space-industry leaders.

We're also proud at CU to be able to educate and train the next generation of Colorado's space scientists and engineers. MAVEN alone helped prepare more than 100 CU-Boulder students for work in the space industry. We know from experience, that many will stay right here in Colorado and contribute to one of the nation's top space economies.

We're fortunate that we can engineer such a great Colorado story, as NASA's top-funded public university. Now, the defining moment has arrived. We've been developing MAVEN for 11 years and it all comes down to a 33-minute rocket burn in just a few moments. As MAVEN's principal investigator, Bruce Jakosky, likes to say, “this business is not for the feint of heart.”

I'm sure we will have much to celebrate tonight. But first I would like to acknowledge a few special guests.

We are pleased to welcome staff from several congressional offices: Ed Perlmutter, Diana DeGette and Jared Polis. Thank you all, for being with us for this exciting evening.

Gov. Hickenlooper is at the Lockheed Martin campus tonight. Since he couldn't be twoplaces at once, he sent us a video greeting, as he celebrates with us from a distance.