CU Boulder Where You Are: 'Collegiate Sports in 2020: What’s Next for the Buffs'

On Collegiate Sports in 2020: What’s Next for the Buffs, University of Colorado Athletic Director Rick George and Colorado Football Head Coach Karl Dorrell discuss what lies ahead in college athletics for the 2020 season and how campus innovations will support the health and wellness of CU student-athletes. 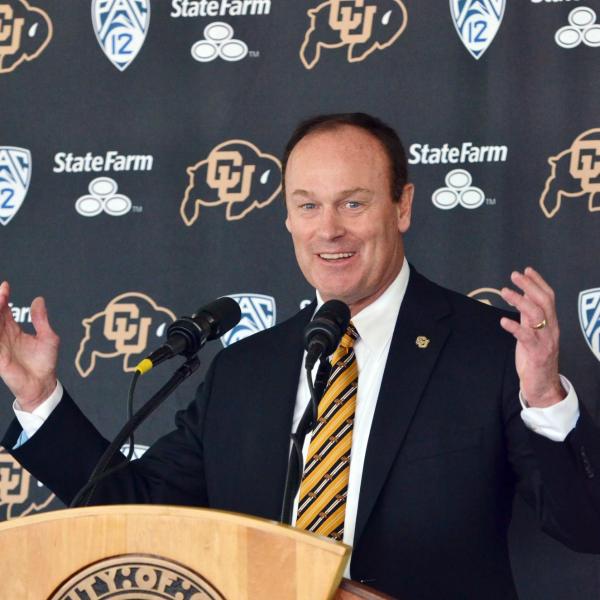 Rick George was named athletic director at the University of Colorado on July 17, 2013, returning to Boulder where he helped play a role in the school’s first and only national championship in football some 23 years earlier.

George came to Colorado from the Texas Rangers baseball club of the American League, where he was named chief operating officer on October 5, 2010 with a promotion to president of business operations in February 2013. He agreed to a 5-year contract at CU, and he officially started on the job on August 12, 2013. In June 2016, the Board of Regents approved a contract extension through 2020-21, and in June 2019, the Regents once again extended him through the 2023-24 academic and athletic year.

On July 19, 2017, George was named chair of the LEAD1 Association, which represents the athletic directors, programs and student-athletes of the 130 member schools of the Football Bowl Subdivision (FBS).  His two-year term with the organization expires this September. Its mission includes influencing how the rules of college sports are enacted and implemented, advocating for the future of college athletics and providing various services to the members. He also serves on the Division I Council of the NCAA, is part of the NCAA's D1 Council Transfer Working Group, and most recently, is serving on an 18-member committee exploring the ability of student-athletes to profit on his or her name, image and likeness; it’s called the NCAA Working Group on State and Federal Legislation. 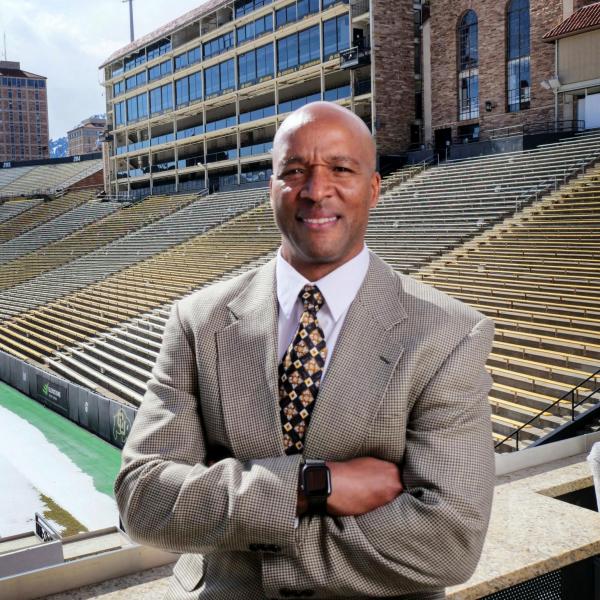 Karl Dorrell was named the 27th fulltime head football coach at the University of Colorado on February 23, 2020, very much a “homecoming” for him as he twice served as an assistant coach for the Buffaloes in the 1990s.

Dorrell returned to CU from the National Football League’s Miami Dolphins, where he coached the receivers for the 2019 season; two days prior to accepting the Colorado position, he had been promoted to Miami’s assistant head coach. He replaced Mel Tucker, who coached the Buffs for one season before accepting the head coach position at Michigan State 12 days before Dorrell was hired.

Bill McCartney hired him at Colorado as his receivers coach on February 20, 1992, Dorrell’s first full-time job on the Division I-A (now FBS) level. After leaving for the 1994 season to coach the receivers and serve as the passing game coordinator at Arizona State under coach Bruce Snyder, he would return to Boulder in 1995 as a member of Rick Neuheisel’s staff, reuniting with his quarterback from their playing days at UCLA. Neuheisel, on the legendary McCartney’s final staff in ’94, replaced him as CU’s head coach and brought back Dorrell to be CU’s offensive coordinator and receivers coach on January 12, 1995. He would add coaching the quarterbacks to his duties in 1998, the last season on the CU staff.

In addition to his two previous stints as an assistant coach for the Buffaloes, he was the receivers coach for the Denver Broncos for three years (2000-2002) under Mike Shanahan.

We're we've been
A short documentary showing how CU Buffs tackled the challenges of the past year.