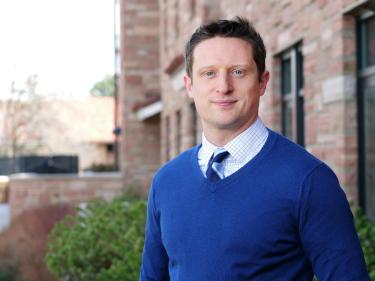 Associate Faculty Director Shilo Brooks supports the academic work of the Benson Center and helps further the establishment of the Center’s intellectual community. He hosts The Free Mind podcast and assists in developing the Center's programming. In addition, Brooks directs the Benson Center’s Summer Institute, which attracts to the CU Boulder campus each year an international pool of scholars conducting research on a wide variety of topics that intersect with the study of Western Civilization. He is a member of the Benson Center's executive committee.

Brooks is Teaching Associate Professor and Faculty Director of the Engineering Leadership Program in the College of Engineering and Applied Science. The program puts science and technology into conversation with the liberal arts to cultivate engineering leaders of curiosity and character. He holds a teaching appointment in the Lockheed Martin Engineering Management Program, and a courtesy appointment in the Herbst Program for Engineering, Ethics and Society.  He is a member of the Boulder Faculty Assembly, a faculty affiliate at CU's Center of the American West, and a member of the executive committee at CU's Center for Leadership.

Past appointments include fellowships at Princeton University's James Madison Program in American Ideals and Institutions,  the University of Virginia’s Program on Constitutionalism and Democracy, and the department of Government and Legal Studies at Bowdoin College.

December 2021: The Education of Cyrus: A Conversation with Shilo Brooks. Madison's Notes, the official podcast of the James Madison Program in American Ideals and Institutions at Princeton University.