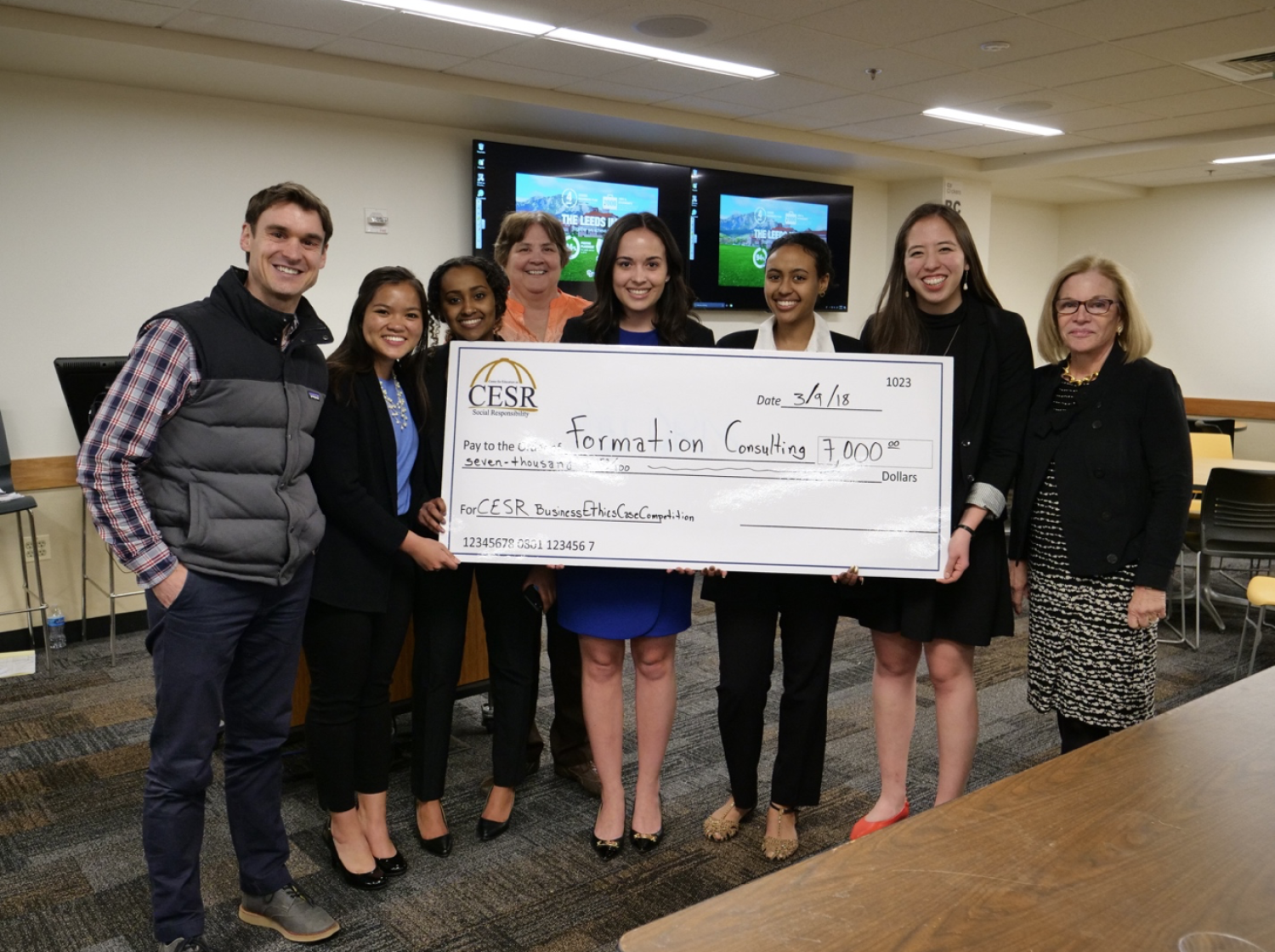 The Center for Ethics & Social Responsibility (CESR) held the final round of its sixth annual Business Ethics Case Competition (BECC) on March 9, 2018. This competition challenges students to explore complex ethical dilemmas. This helps students to understand both their own values, and how challenging it can be to apply them in the complex business environment.

The winning team, Formation Consulting, took home the grand prize of $7,000. The women on the team, which took its name from the song by Beyoncé, are all members of the Leeds Diverse Scholars Program. Team members include senior Meredith Maney, juniors Hayley Porter and Bella Kiflom, sophomore Makda Fitsum, and freshman Katie Torres.

The competing teams analyzed a separate business ethics case in each round. The first involved the question of religious expression in the workplace and its impacts on coworkers. The second involved considering the impact of airlines adopting a policy to charge overweight passengers more than other passengers based on their weight. 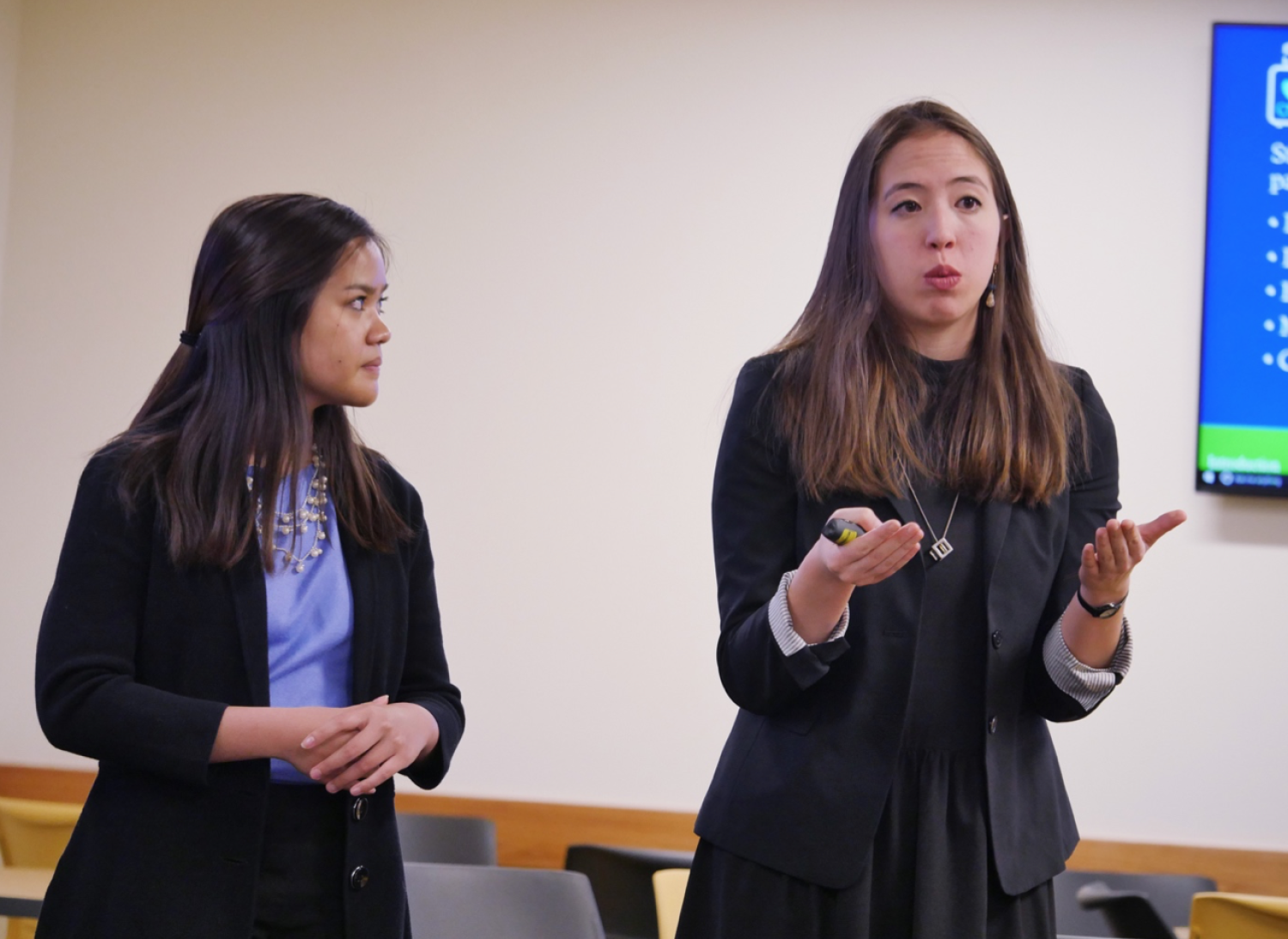 Discover Meredith Maney’s take on the competition below:

“Both of this year's cases for BECC offered a lot to unpack.  In the first round, which was weighing the religious display of the swastika against the history of the sign as a symbol of hate, our team had to think a lot about the different histories of the impacted groups.  The use of the swastika symbol as a sign of hate and genocide by the Nazi's couldn't be ignored, especially in Europe where the case took place.  But we also had to consider the historic colonization and discrimination those of the Hindu, Buddhist, and Jainist faiths often had to endure. Religious freedoms and the right to a safe and welcoming work environment were two issues at conflict in the case. Ultimately, while we thought an outright ban against religious symbols (swastikas, crosses, hijabs, etc.) was overbearing and would lose some of what made the company great, we also thought that there had to be steps to rectify the discomfort Jewish people were facing.  We wanted a better balance between work and faith, so that not everyone felt the need to demonstrate faith in order to succeed at the company, and larger conversations about company culture were also necessary.

“We had a lot of fun unpacking the prelims case, but the finals case was very challenging.  It asked us to weigh the merits of charging passengers by weight for the air transportation industry as an organization, rather than an individual company.  As an industry organization, the challenges were even greater - what was the role of the organization and how much control could it have over its member airlines? Our team also played to our skills, unpacking a lot about the stakeholders. If one was to charge by weight, what does that do to the passengers? To the frontline employees who would have to make those judgement calls?  To the atmosphere of the work environment?  Ultimately, we felt it was important to remember that certain groups face weight based discrimination at higher rates than others.  Women and POC (People of Color) are more likely to be discriminated against for their weight, and at lower weights than their white and male counterparts.  This really helped inform our decision, recommending against endorsing weight based policies.” 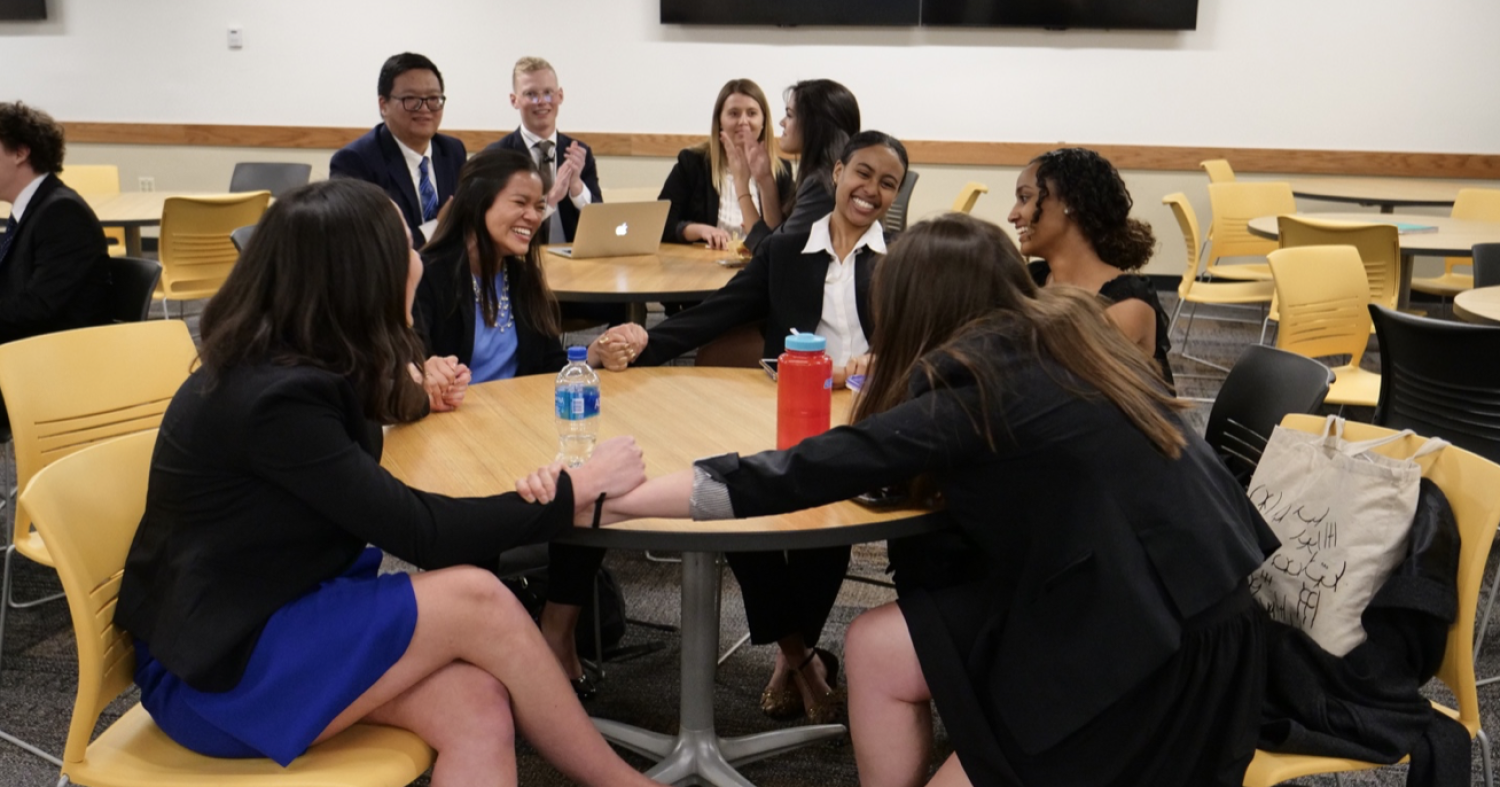 About the Business Ethics Case Competition

This year’s competition offered more than $16,000 in prize money, which CESR divided among the six finalist teams. Time Borden, a pioneering force in the development of ethical issues within corporate governance, has sponsored the competition since its inception.

Sign up here to get involved with next year’s Business Ethics Case Competition and learn more about past judges and topics.