From Bryant lab to London, alumna’s educational journey led her to the fight against COVID-19

Anna Blakney, a third-generation alumna of the Department of Chemical and Biological Engineering, is among the researchers working to develop a vaccine for the COVID-19 virus at Imperial College London. 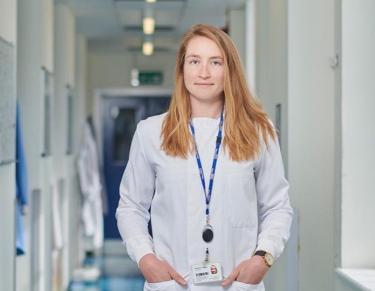 “It’s really an incredible opportunity,” Blakney said. “As scientists, what we are really in it for is the joy of discovery—but also being able to impact human health.”

Blakney was the College of Engineering and Applied Science’s class of 2012 Silver Medal Award winner and went on to earn her PhD in bioengineering from the University of Washington. Currently, she is the Marie Sklodowska-Curie Post-Doctoral Research Fellow at Imperial College London.

Blakney works in Professor Robin Shattock’s lab within the Department of Infectious Disease. She is part of a research group that has been developing a vaccine platform for almost four years—one that uses self-amplifying RNA that is derived from an alpha virus and encapsulated in lipid nanoparticles. When delivered to a cell, this RNA makes copies of itself, resulting in a high amount of protein and antigen expression—meaning dosages can be dozens or hundreds of times smaller than usual.

"This is highly useful for outbreak scenarios, because it means we can make a higher number of doses from the same batch size of RNA, which is advantageous when we're trying to make millions of doses quickly," Blakney said. “We were planning on going into clinical trials later this year, but with the spread of coronavirus becoming a global pandemic, we were well-poised to be able to pivot and focus on making this vaccine."

Research into a potential vaccine for COVID-19 at Imperial College is an international effort between the Shattock lab, Acuitas Therapeutics of Vancouver and TriLink Biotechnologies in California. The Shattock lab has seen its research staff reduced from 30 to eight due to social distancing measures—with those remaining working on the vaccine.

Her research group is preparing the vaccine for a succession of upcoming clinical trials. If they go well, the vaccine would be available next year. What remains to be seen is how often the vaccine will need to be modified and re-administered, like the yearly flu shot.

“It will depend on how long the immunity from the vaccine lasts—one year, five years, or does it last a lifetime?” Blakney explained. “But it also depends on how successful we are in limiting the spread of the virus, and whether it is able to hide in viral reservoirs—and whether we will see seasonal outbreaks.”

As the only trained engineer among a team of immunologists, her perspective helps bring fresh ideas to her group’s problems.

“The engineering perspective is one of coming in with this iterative design mindset of testing something, changing it, and really trying to understand the system. I think that’s pretty unique to engineering training, and I think that’s a really valuable skill set.”

Blakney credits a summer camp-style outreach program at CU for seeding her interest in bioengineering. As a high school student, she attended this program one summer, spending four days in the dorms and participating in various engineering-related activities. One such event was a lecture and demonstration concerning polymers by Professor Kristi Anseth. This presentation inspired Blakney to attend CU to become a chemical engineer.

It was her education at CU that helped prepare her for just such a career in medical research.

“Majoring in chemical engineering is one of the best undergrad majors you can do, that’s what I tell everybody,” she said. “It gives you this unique way of thinking critically, but you also have a problem-solving sort of outlook. It’s really challenging and makes you think about how to make things work.”

As an undergraduate, Blakney worked as a researcher in Professor Stefanie Bryant’s lab.

“Stefanie was an amazing mentor for me,” Blakney said. “She was truly my inspiration for deciding to go into research. I know from my experiences with her that I wanted to lead a research group and become an independent researcher. It set me up perfectly to know what my next step was going to be."

Bryant would frequently meet with Blakney one-on-one, which was a rare commitment for a faculty member to make with an undergraduate. The two still keep in contact, often seeing one another at conferences prior to the pandemic.

For biomedical research, having an engineering background helps her think through the challenges associated with scaling up the production of treatments.

“Vaccine development at a lab-scale is easy to do, but when you think about scaling it up to make five million doses, that’s really a chemical engineering problem,” she said.

“No matter what you’re developing in the bio field, there is a need for chemical engineers and their skill set.”

Feature is from Chemical and Biological Engineering news and appeared here first.