Having finished her thesis and undergraduate studies, Rea said she can look back on her time at CU Boulder with fond memories and good humor 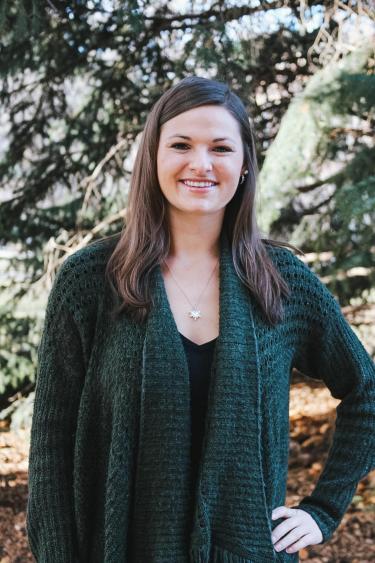 In middle school, Jessica Rea was fascinated by the gruesome injury of Phineas Gage, a railroad foreman who miraculously survived an 1848 explosion that shot a three-foot-long iron rod through his skull, destroying much of his left frontal lobe. Rea became so fascinated, in fact, that she is making a career studying the workings of the brain.  That early experience “was the first time I ever thought about the brain and how the brain makes us who we are,” Rea said recently. Gage lived for a dozen years after the accident, but, Rea noted, “He became a completely different person after that.”  From that point on, Rea knew she wanted to study the brain, and neuroscience was her chosen path. That decision paid off.

In December, Rea was named the fall 2019 outstanding graduate of the College of Arts and Sciences at the University of Colorado Boulder. She earned a bachelor’s in neuroscience, summa cum laude, and a second degree in molecular, cellular and developmental biology. Additionally, she attained a minor in business.  Working in the CU Boulder neuroscience laboratory of Assistant Professor Michael Saddoris, Rea conducted experiments in rats to better understand how chronic cocaine use hinders learning and motivation. To investigate, Rea compared the willingness of rats to self-administer cocaine to stimulate the neurotransmitters dopamine or glutamate in two sections of the basal forebrain.

Rea observed more active cocaine self-administration in rats that stimulated one section versus another. Further research in this area could help scientists understand the connection between cocaine use and cognitive deficits, she writes in her abstract. “This, in turn, may help decipher how to reverse these impairments to treat those with cocaine abuse disorder, for which there is currently no FDA-approved treatment.” Commenting on Rea’s work, Saddoris wrote that her project was highly technical and difficult to complete. Further, she conducted a “monumental amount of work” verifying data and showing an “extraordinary amount of independence and organization.” In a speech to fellow graduates in December, Rea noted that the process of writing and defending her honors thesis “pushed me beyond all limitations I had placed on myself and challenged me to perform at a higher level than I had ever previously accomplished.”  She explained the research in her thesis, noting the role of specific neural circuits involved in learning and motivation and how these signals are altered or disrupted following cocaine experience using a rodent model. Cocaine addiction has an extremely high rate of relapse, even after long periods of abstinence, she noted, adding that those who encounter cues that have associated with the drug—such as paraphernalia or context—can re-trigger drug-seeking behaviors. “Individuals are highly motivated to find and take the drug, while at the same time it becomes harder for them to motivate other behaviors like a new hobby or reaching out to spend time with family and friends,” she said.  “It is these motivational deficits and the neural basis behind them that I focused on. If we could gain a better understanding of how cocaine alters these circuits, then maybe we would be on the right track to figuring out how to alleviate changes or reverse them to help treat individuals suffering cocaine abuse.”

Having finished her thesis and undergraduate studies, Rea said she can look back on her time at CU Boulder with fond memories and good humor. But there were times, she told fellow graduates, she began to doubt whether she could ach

ieve what she’d set out to do, “times when I couldn’t imagine standing in front of you today, when it seemed ironic that I should be researching the neural circuitry involved with motivation when finding my own motivation seemed nearly impossible.”  Rea is applying to five graduate schools on the West Coast and plans to continue studying neuroscience.