Lior was a student in the BSI Scholars program during the summer of 2017, funded through the program to conduct biocrusts field research across the American West with Dr. Barger's lab. 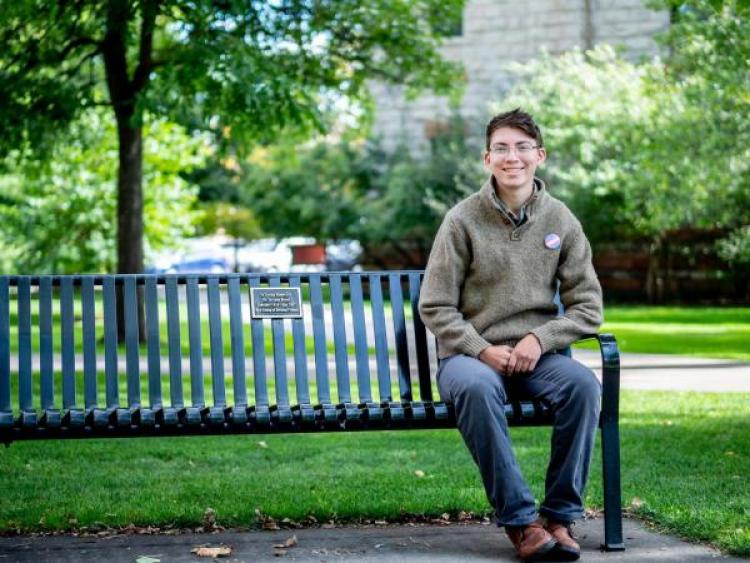 Across the semi-arid, windswept areas of the American West, as well as in dry places around the world, biological soil crust clings to the soil in places where vascular plants, like trees and grasses that don’t grow well because the soil is nutrient-poor in a dry climate. Tenacious and hearty, biocrusts have been living on Earth for billions of years. And yet this complex living community of algae, cyanobacteria, fungi, lichens and mosses is vulnerable to human footsteps.

Lior Gross, a BA/MA candidate in ecology and evolutionary biology, with a minor in geology, is studying ways to reintroduce biocrust back onto depleted land. The BA/MA degree program at CU Boulder allows Gross to earn a bachelor's degree and a master's degree concurrently in five years.

“It’s important because of the huge role they play in preventing erosion,” said Gross, who is conducting research into desert soil restoration using biocrust. “Desert soils are easily blown away and that dust clogs up streams, making them warmer and shallower, which then affects trout populations, which is an important industry in Colorado and the western U.S.”

Biocrusts are integral for soil stabilization in ecosystems that have patchy vegetation. This veneer of life growing on the top few millimeters of soil is crucial to the ecosystem.

At the core of biocrust is cyanobacteria—bacteria that have been living on Earth’s terrestrial surfaces for more than 3.5 billion years—which are a critical part of the ecosystem in dryland areas. Cyanobacteria mats send out sticky filaments through the soil that work as a living network to hold soil in place.

Biocrusts contribute nutrients and organic matter to desert soil and are an important source of organic matter where plant cover is sparse. They are fragile and easily destroyed by cattle grazing, energy development and outdoor recreation throughout the western United States.

“It’s two sides of a coin,” Gross said. “Biocrusts are resilient. They live in harsh conditions, but they’re also fragile enough that the stress of people continuously walking on them—that they’re not evolutionarily prepared for—can damage them.”

While hearty and able to live in harsh conditions, biocrusts are easily susceptible to damage, causing the soil to be blown away. Impact from animal hooves, human footsteps and off-road vehicles have caused extensive degradation throughout the drylands of the American West.

“We think biocrusts once covered a great area of the American West,” Gross said. “A lot have since been wiped out, causing soil erosion.  When the soil blows away, all the nutrients and resources are lost. We’re finding out just how crucial biocrust is to the ecosystem.”

Using landscape ecology principles, Gross is studying how to increase biological soil crust recovery by preparing inoculum, which is biocrust grown in a greenhouse. Researchers seed the inoculum onto depleted areas of land to help prevent erosion.

Researchers know that greenhouse-grown biocrust and the associated cyanobacteria help rehabilitate damaged soil. Gross wanted to know the best way to plant the inoculum to aid in optimal soil recovery.

“I wanted to see if we can use the principles of landscape ecology to inform the way we’re inoculating that is more efficient so we can optimize the way we use this inoculum,” Gross said.

When the inoculum is applied in patches, like a chess board, or in long strips, instead of blanketing the area, the process is more efficient and helps the biocrust to recover in the uninoculated area just as well as blanketing a whole area. As part of the research conducted in the CU Boulder greenhouse, Gross grew inoculum in three shapes—big patches, smaller patches and narrow strips—to determine which treatment filled in faster on untreated soil. 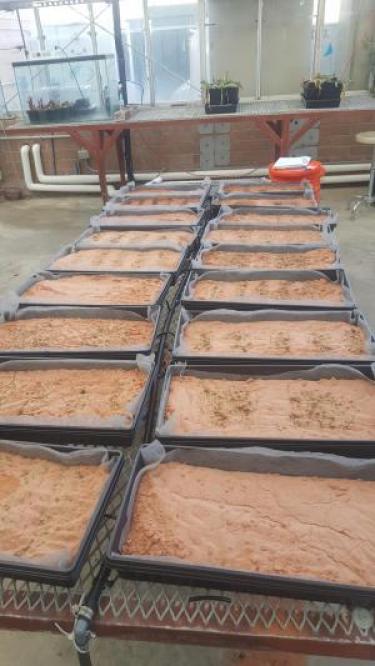 The greenhouse-based results show that the empty spaces between the inoculum patches had less biocrust than inside the patches, but still had some biocrust growing, which Gross considers a hopeful sign of soil recovery. The big-patch treatment also had more biocrust than the strip treatment, which was the inverse of Gross’ hypothesis.

“I thought the most patch edge versus area would result in the best recovery,” Gross said. “But it turned out that the least edge resulted in the best recovery, perhaps because the density helped establish a stronger community first, and the biocrust had to become established before it could grow into the inner spaces.”

For the past three years, Gross has been working in the Barger Lab for Aridlands Ecology and Restoration at CU Boulder, where researchers’ current focus as a lab group is on restoration of degraded dryland ecosystems with a focus on native plant and biological soil crust restoration.

After the first semester in the Barger Lab, Gross had an internship with the Grand Canyon Trust working on a grazing project in Colorado by mapping areas that had recovered from cattle-related damage.

After finishing the concurrent bachelor’s/master’s program in December, Gross has an internship in Israel at the Arava Institute for Environmental Studies. While there, Gross will study the role of cyanobacteria in hyper-arid and wadi systems in the Negev Desert in Israel, and perhaps extend some of this knowledge of biocrust restoration towards the eco-social ecosystem services work that scientists at the Arava are performing with Jordanian natural resource managers.

“It’s not just about growing biocrust,” Gross said. “It’s about restoring and understanding the ecosystem as a whole. Even a few footprints can have a long-lasting impact on ecosystems.”

Read this article on the CU Boulder Today site here.