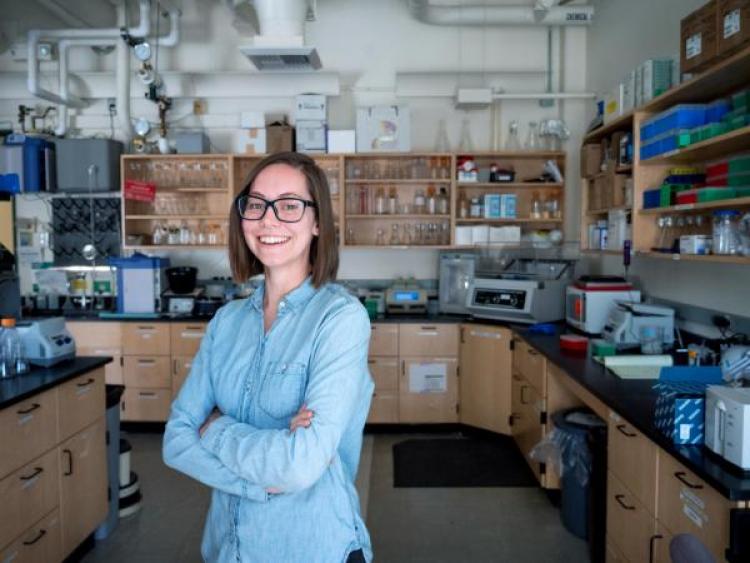 Emma Simmerman, a senior physics major, has been awarded a $10,000 scholarship from the Astronaut Scholarship Foundation (ASF).

NASA astronaut Joe Tanner will present with the award during a ceremony at 1:15 p.m. Friday, Sept. 28, in Andrews Hall. Tanner is an instructor at CU Boulder. The event is free and open to the public. Simmerman is the 22nd CU Boulder recipient.

Simmerman learned she had won the scholarship when she got a call from her mom, who texted a photo of the ASF envelope. Too excited to wait, Simmerman had her mom open the envelope and read the news to her on the phone.

“I was like, ‘Open it, open it,’” Simmerman said. “My mom was crying on the phone. The scholarship means so much to me that ASF believes in my potential and capabilities.”

Simmerman is a research assistant at JILA working in the Ralph Jimenez Lab studying fluorescent proteins used in biological imaging. Research there spans experimental studies of protein dynamics and photophysics and development of optical tools to explore biological function.

JILA is a physical science research institute, jointly operated by CU Boulder and the National Institute of Standards and Technology.

Last summer, Simmerman worked on a Research Experiences for Undergraduates (REU) project studying optical materials at the University of Chicago. REU projects are funded by the National Science Foundation. The project involved trapping bouncing nanoparticles with laser light. She recorded movies of the nanoparticles and tracked their motion, to better understand the energy landscape in the trap and the interactions of the particles with each other.

Curious and imaginative, Simmerman grew up climbing trees, rambling on dirt roads and playing in irrigation ditches on a 150-acre ranch outside the small town of Penrose in southern Colorado.

When she wasn't playing outside, Simmerman read books. She was such a voracious reader her dad nicknamed her Nose-in-a-Book. She gave the lizards, toads, tarantulas and bugs she caught names from the books she read. After reading a book about a fish species thought to be extinct but discovered living deep in the ocean, Simmerman named her first beta fish Coelacanth in honor of the long-lived species.

Simmerman never thought she would be a scientist because she had never met a scientist. However, she enjoyed biology and considered a medical career—until she came to CU Boulder and discovered physics.

Through her research opportunities at CU Boulder, she is on a path that combines her passion for science with her humanitarian interests. As a first-generation college student, Simmerman thinks it’s important to extend opportunities in science to historically underrepresented students, so she volunteers with I Have a Dream, tutoring low-income high school students. I want to continue being involved in similar efforts to make nonscientists feel like they understand how science works,” she said. At CU, Simmerman is a peer tutor in physics and math with the Miramontes Arts and Sciences Program (MASP) and is a Norlin Scholar.

After graduating in May, Simmerman plans to continue studying physics in graduate school.

“I want to learn about everything,” Simmerman said. “That’s important for me in how I define myself. I try to be a curious person who is trying to ask really good questions and to not be afraid to ask questions.”