Dr. Alena Grabowski, professor in Integrative Physiology, was a member of BSI's Science Squad during her graduate education. For many years until 2014, the Science Squad sent CU Boulder graduate students into local schools to give presentations on their research, lead laboratory activities, and answer student questions about studying science and post-secondary education. 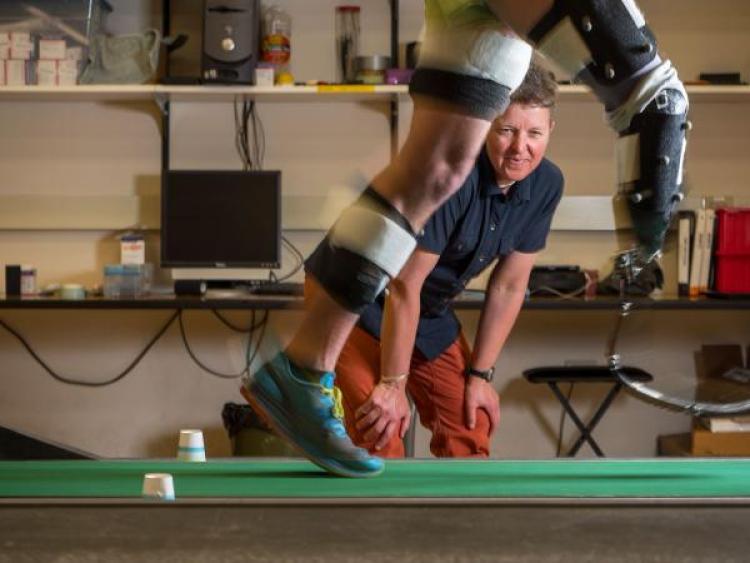 Hours before student alarm clocks go off, Alena Grabowski (Kines’98; PhD’07) slips on a head lamp and trail shoes and heads for the hills.

When she’s in motion, the 60-mile-a-week trail runner doesn’t think much about how her foot hits the ground with each step, how she slightly adjusts her balance as she rounds each switchback or how her stride might be different if her calves were made of carbon fiber instead of flesh and bone.

But when she gets to work at CU Boulder, that’s all she thinks about.

One of a half-dozen researchers on the planet who specializes in studying lower-limb prostheses for runners, Grabowski, director of CU’s Applied Biomechanics Laboratory, has dedicated her career to helping elite amputee athletes like former South African sprinter Oscar Pistorius, aka the “Blade Runner,” and German long-jumper Marcus Rehm, aka the “Blade Jumper,” address a controversial question that could make or break athletic dreams: Should runners with prosthetic legs be able to compete alongside non-amputees?

Meanwhile, Grabowski is also developing a new generation of prostheses — blades — that could enable everyday athletes to do things that are difficult, if not impossible, to do today. Among them: Trail running.

“I never take for granted the fact that I can get up in the morning and go for a run without even thinking about it,” said Grabowski, 45, who has run 50-mile events in Colorado’s San Juan mountains and multi-day races through the Italian Dolomites. “I just want everyone to be able to move like I can.”

Grabowski won’t forget the moment in August 2012 when Pistorius burst out of the blocks in London Stadium, becoming the first runner without biological legs to compete in the Olympics. As she watched on TV, the humble scientist couldn’t help but feel pride knowing she helped get him there.

“It was a huge deal for the Paralympic community,” she said. “And for me, career wise, it was a turning point.”

The daughter of a track coach in Minnesota, Grabowski started running not long after she could walk. When she arrived at CU Boulder as a student in the mid-1990s, she began translating that passion into a unique career. She earned a bachelor’s degree and a doctorate in CU’s integrative physiology department, studying under sports biomechanics researcher Rodger Kram. During post-graduate work at MIT, she worked with Hugh Herr, a famed mountaineer who lost both his legs after a climbing accident and now develops bionic prosthetics.

All along, she kept hearing about Pistorius, who was making headlines for his impressive times in the 400-meter, and for rumors that his J-Shaped Össur Cheetah blades gave him an unfair advantage.

In 2008, just as Grabowski was wrapping up her post-doctoral work, the International Association of Athletics Federations (IAAF) banned Pistorius from competing against able-bodied runners, citing a German study that concluded his blades allowed him to expend 25 percent less energy.

When his lawyers scoured the globe for a scientific team that could provide a second opinion, they found Herr, Kram and their junior colleague — Grabowski.

“It was exciting just to be a part of it,” she said.

The team gathered at Rice University in Texas, then among the only labs with a treadmill fast enough to measure Pistorius at full throttle. Over three whirlwind days, they and four researchers from other universities assessed his biomechanics, energy expenditure and endurance at a lightning 24 mph pace.

In the end, the researchers struggled to agree how to interpret the data they’d collected. But five of seven — including Herr, Kram and Grabowski — concluded that Pistorius’s blades put him at a disadvantage because they pushed off with less force than a biological limb would.

They also concluded the methods the German researchers used to measure aerobic energy expenditure were flawed.

Bottom line: There was “insufficient evidence” he had a competitive edge, Herr, Kram and Grabowski concluded.

They made their case before the Court of Arbitration for Sport — and won. Pistorius (who in 2015 would be convicted of murdering his girlfriend and ultimately sentenced to more than a decade in prison) was eligible for Olympic competition.

At the 2012 summer Olympic games, he made history, running the 400-meter event in 45.44 seconds, the first double-amputee ever to participate.

“For kids who had an amputation and for adults who had some sort of physical disability — to see this guy push the boundaries like that, it opened a door,” Grabowski said.

Today, six years after Pistorius’ Olympic debut, the IAAF maintains a 2007 rule prohibiting mechanical aids, unless an athlete can prove they don’t provide a competitive advantage.

That stance, and similar polices by high school and college governing bodies, puts her rare expertise in high demand.

In 2016, she provided scientific evidence to the NCAA that paved the way for below-the-knee amputee Nicky Maxwell to run track at Harvard.

In 2017, she persuaded the NCAA that — as with Pistorius — there was no scientific evidence suggesting high school sprinter Hunter Woodhall, whose legs were amputated below the knee in infancy, is advantaged by his prostheses.

“I am running in college in large part due to Alena and her work,” Woodhall, 19, said from his dorm room at the University of Arkansas. He is the first double-amputee ever to earn a Division 1 track and field scholarship.

Meanwhile, German long-jumper Rehm is waiting for science to answer key questions about his blade.

His hopes of competing in the 2016 Rio Olympics were dashed after the IAAF determined he’d failed to prove he had no advantage. Grabowski, who has studied Rehm extensively, determined his prosthesis decreases his run-up speed but provides a more efficient take-off for the long-jump. She’ll study amputee long-jumpers further.

“It’s an important question, but also an elusive question,” she said. “How can you really determine conclusively whether someone has an advantage or disadvantage?”

At CU, Grabowski has her own state-of-the art treadmill, a shiny $100,000 machine that can clock runners at up to 30 mph and measure their force in 3D. Sometimes she places a net at the back in case their blades come loose.

One morning this spring, 35-year-old trail runner and marathoner Steve Hinson, who lost a leg in a lawnmower accident at age 9, hopped on the treadmill with dozens of sensors affixed to his body.

As he ran at various speeds and inclines, fresh data accumulating, Grabowski looked on, contemplating ways to help him and runners like him.

Contrary to common belief, prosthetic blades haven’t advanced much in the past decade, she said. For sprinters, they feel awkward and cumbersome in the starting blocks, and they perform poorly in curves. For trail runners, the inert limbs can be uncomfortable over long distances, and they lack the sensory feedback mechanisms that aid smooth movement up and down hills.

“I think we can do a lot better,” Grabowski said.

She envisions a day when impaired athletes can choose among various blades — models sanctioned by sound science for use in strictly governed competitions, and models for anything-goes fun-runs, which might, indeed, help them push beyond the limits of the human body.

“The reality is, no one can just put on a pair of blades and be instantly fast,” said Woodhall, the Arkansas runner. “You still have to train and lift and take care of yourself and put in the work. No one wants to have all that work discredited by people saying the only reason you can do what you do is because of your blades. That’s why the work she is doing is so important.”