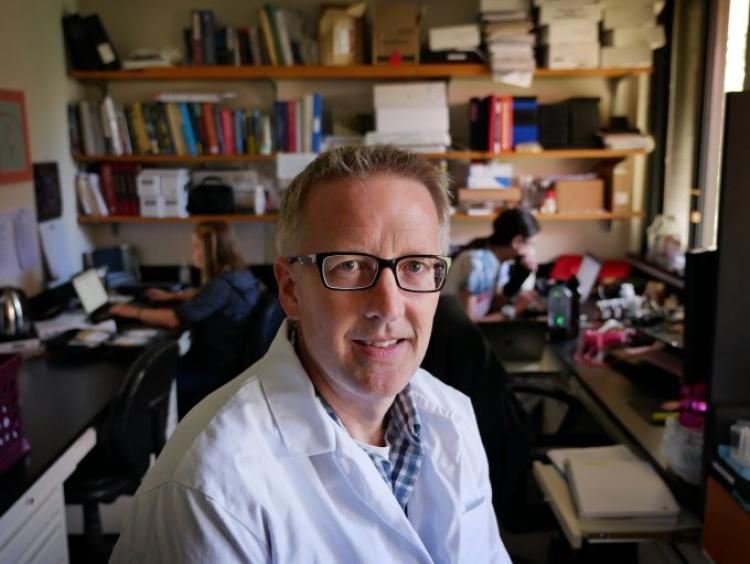 Injections of the soil bacterium Mycobacterium vaccae (M. vaccae NCTC 11659) promote stress resilience and improve coping behaviors in mice, according to a new study led by the University of Colorado Boulder.

The researchers also found that M. vaccae prevented stress-induced colitis, a typical symptom of inflammatory bowel disease (IBD), suggesting that immunization with the bacteria may have a wide-ranging suite of health benefits.

The findings appear today in the journal Proceedings of the National Academy of Sciences.

“The immunized mice responded with a more proactive behavioral coping response to stress, a strategy that has been associated with stress resilience in animals and humans,” said Christopher Lowry, an associate professor in the Department of Integrative Physiology at CU-Boulder and the senior author of the new research.

Researchers found that mice who were given a heat-killed preparation of M. vaccae responded with approximately half as many flight and avoidance behaviors when challenged by an aggressor, as compared to untreated mice, during the first hour of the experiment. The immunized mice continued to show decreased levels of submissive behaviors one to two weeks after treatment. M. vaccae treatment reduced stress-induced colitis, as measured by cellular damage to the colon and infiltration of immune cells, by approximately 50 percent, as compared to untreated mice.

The research underscores the importance of an organism’s microbiome in preventing and coping with inflammation-related diseases and psychiatric conditions. Microbiomes are made up of teeming communities of microorganisms, including environmental bacteria. A microbiome’s diversity is increasingly recognized to play key roles in immunoregulation—controlling autoimmune and allergic responses, decreasing vulnerability to infection, and other regulatory health functions. Previous research has suggested that stress-related conditions such as posttraumatic stress disorder (PTSD) may be due to a failure of immunoregulation.

“An injection of M. vaccae is not designed to target a particular antigen the way a vaccine would, but instead activates the individual’s immunoregulatory responses to protect from inappropriate inflammation,” said Lowry.

The “hygiene hypothesis,” also known as the “Old Friends” hypothesis, posits that modern sanitary measures, antibiotics, and dietary changes have greatly reduced human exposure to environmental bacteria and other immunoregulatory organisms, thereby reducing the diversity of human microbiomes and their ability to suppress inappropriate inflammation. A lack of exposure to these organisms is thought to contribute to the current epidemic of inflammatory disease in modern urban societies.

“Humans and human ancestors used to encounter these microorganisms in abundance every day, but modern life doesn’t facilitate those interactions,” said co-author Rob Knight, professor and director of the Center for Microbiome Innovation at the University of California San Diego.

“We are continuing to look at how these naturally-occurring bacteria can modulate the immune system in ways that might be beneficial,” said Lowry.

The research is supported by “Novel Therapeutic Approaches to Treatment of Anxiety and Depression,” a CU Foundation fund designed to support research on the prevention and treatment of anxiety and affective disorders.