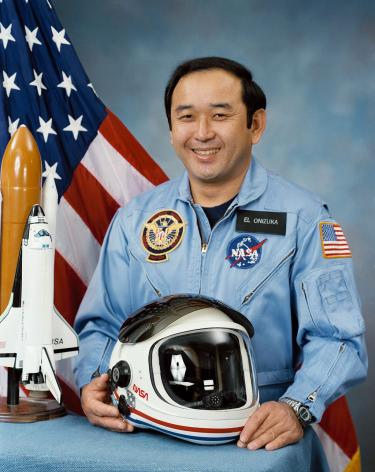 Col Ellsion S. Onizuka was born on 24 June, 1946 in Kealakekua, Kona, Hawaii, a rural community that hindered none of his ambitious, astronomical dreams.

During high school, he was a dedicated member of the 4-H Club, student council, National Honor Society, yearbook club, varsity basketball and baseball, and the Boy Scouts; he graduated with Honors from Konawaena High School in 1964.

Onizuka attended the University of Colorado Boulder and earned a Bachelor of Science and a Master of Science degree in Aerospace Engineering in 1969. His professors praised him as “an excellent student and a natural leader in everything he did.” He commissioned into the Air Force in 1970 through CU’s Air Force ROTC program as a distinguished military graduate. As a cadet, he was a member of the Arnold Air Society.

Soon after, Onizuka was selected for the Challenger flight 51-L, along with 6 other crew members who were carefully selected to represent American’s spirit of exploration. On 28 January, 1986 the Space Shuttle Challenger lifted from Earth; it exploded 73 seconds after liftoff, tragically ending the lives of seven ambitious, courageous Americans. 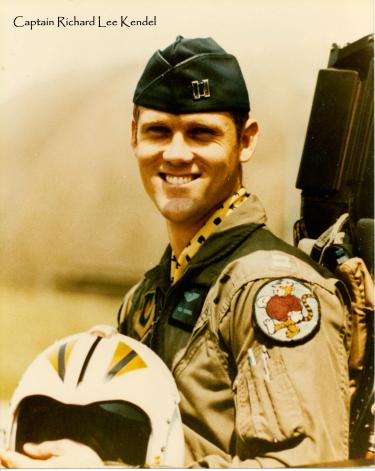 Capt Richard Lee Kendel was born August 28, 1954 in Los Angeles, California to Robert and Dorla Kendel.  It was in high school that Richard discovered his desire to fly, and began taking flying lessons.

He had two brothers, Bob and Mike and they grew up in La Crescenta, California. He enjoyed family fishing trips and, along with his brother, Mike, developed a fondness for waterskiing.

After graduating, Richard attended the University of Colorado Boulder, and received his BS in Aerospace Engineering May 21, 1976.  He was commissioned into the United States Air Force as a 2nd Lieutenant that same day.  While stationed at Randolph AFB, he met his future wife, Mary.  Tragically, on June 1, 1983, Capt Kendel perished in a mid-air collision over Rheinland-Pfaltz, Germany while piloting his F-15 fighter jet.  He was 28 years old.

As his brother, Mike, said so eloquently, “In all, it is a tragic cost that we all pay for the freedom we enjoy in this country.  But we also remember with love and joy, the quality of the people that we lose.  As for Richard, he was doing what he truly loved to do and, except for the accident at the end, I don’t think he would have changed a darned thing.” ~Mike Kendel 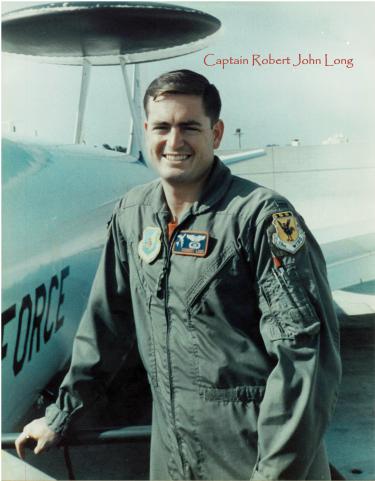 Capt Robert John Long was born to Michael and Charlotte Long in Tishomingo, OK on 7 November 1967.  He graduated from Wheat Ridge High School, Wheat Ridge, CO in 1986, having become an Eagle Scout in 1985.

Robert attended the University of Colorado, Boulder, CO where he became a member of the Pershing Rifle Team.  He graduated in 1990 with a Bachelor of Science degree.  He was commissioned as an Air Force 2nd Lieutenant on May 1990 by Lieutenant Colonel Corry Mordeaux.

Capt Long attended training at Tyndall AFB, FL and Tinker AFB, OK before going to his first operational assignment at the 961st Airborne Air Control Squadron, Kadena AB, Japan, where he served as a Weapons Director and instructor from November 1991 to May 1995.  Capt Long deployed to Panama several times to fight the President’s War on Drugs and coordinated deployments to Cope Thunder, PACAFs largest war-fighting exercise.  In September 1992, he commissioned his sister, Kathleen Long, as an Air Force 2nd Lieutenant.

Capt Long upgraded to Senior Director and then transferred to the 962nd Airborne Air Control Squadron, Elmendorf AFB, AK.  He loved the outdoors and organized several adventures in his short time in Alaska, including trips to remote Forest Service cabins.  Captain “Cowboy” Long was Senior Director on Yukla 27. He, along with 23 other flight crew members on board, perished on 22 September 1995, when the starboard side engines of their flight suffered a catastrophic bird strike. 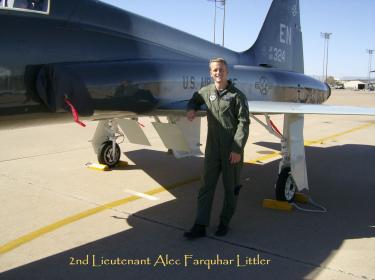 He returned to Glenwood with his family to attend high school.  As a student body officer, mock trial participant, and member of the cross-country team, Alec loved his high school experience.  He was selected to attend the United State Air Force Academy, but chose instead to enter the Air Force through the AFROTC program at the University of Colorado Boulder. After four years of leadership in Air Force ROTC, Alec achieved his dream of acceptance into the Euro-NATO Joint Jet Pilot Training program.  As a member of this elite group, Alec challenged himself and his flight mates to be the best.

Lt Littler perished in a training jet crash on May 1, 2008 at Sheppard Air Force Base, TX.  Alec was a pilot, a mentor and a friend with a warm heart and a wry sense of humor.  His commitment to those he loved was unwavering.  Though his life was cut short, his passion took him from this world in the fulfillment of his greatest desire.  He will be forever missed by his parents, Bob and Penny, sister, Carlyn, and brother, Pearce. 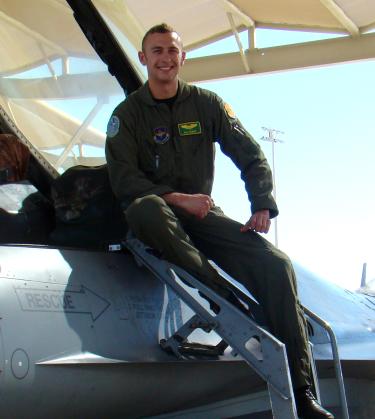 Capt William H. “Pyro” DuBois, Jr. was born on August 14, 1984 to William “Ham” and Donna DuBois in Rifle, Colorado. His youth was spent in constant motion; harassing his sister and sports were two of his favorite things.

Basketball, soccer, baseball, and swimming filled his summers.  He also evented horses,  and even competed in the North American Young Riders Championship.  While attending Rifle High School, Will was involved in choir, soccer, track, school plays, the National Honor Society, and was elected Senior class president.  Will was exceptionally accomplished in many ways, at an early age.

Capt DuBois attended the University of Colorado Boulder on a full-ride Air Force Scholarship, majoring in Aerospace Engineering.  He graduated with honors in May 2008, and was also the Distinguished Graduate in his commissioning class from the 105th AFROTC Detachment. Although Will was dedicated to academics, leadership, and becoming an outstanding Air Force officer, he also found time to join the Kappa Sigma fraternity.  Upon graduation he learned that he was accepted to the elite pilot training program, ENJJPT (Euro Nato Joint Jet Pilot Training) at Sheppard AFB, TX.  Afterwards, he proceeded to F16 training at Luke AFB, AZ.   There, he was twice named the top fighter pilot in his class and earned two Top Gun awards.  He was also an F16 instructor pilote, flight lead, and combat commander.  “That kind of officership at that young age is extremely rare,” said Col Paul Murray, 20th Operations Group Commander at Shaw AFB.

In 2011, he was assigned to Kunsan AB, Korea where he proudly flew for the 35th Fighter Squadron, known as the Pantons.  Shortly after reporting, he earned the call sign “Pyro”.  It was there that he met the love of his life, Ashley Jones. He soon returned to the States with his bride to be, and was based at Shaw AFB, SC in the 77th Fighter Squadron, the Gamblers.  Ashley and Will married just days before he was deployed to the Middle East.   On December 1, 2014, Capt DuBois and his wingman took off from their base in the early morning hours.  His wingman’s F16 developed mechanical issues.  True to his character and leadership, Will was escorting his wingman safely back to base, when his own jet went down.  He was 30 years old.

He is survived by his beautiful wife, Ashley; his father and mother, Ham and Donna; his sister, Devon; his young nephew, Karsen; his adorable lab puppy, Delta; and hundreds of friends.

“Anything in life worth doing, is worth over-doing.  Moderation is for cowards." 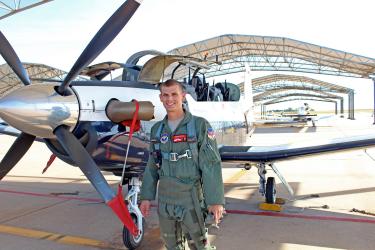 1st Lt. Dale Bryant Shillington II was born July 12, 1991, to Kevin and Sue Shillington.  Dale grew up in Lawrence, KS, where he graduated from Lawrence Free State High School in 2009.

There, he enjoyed playing soccer and golf, and met the love of his life, Courtney.

In 2009, Dale attended the University of Colorado at Colorado Springs for his undergraduate degree on an Air Force scholarship. While in college, Dale completed the Air Force ROTC program in Boulder, Colorado. Aspiring to be like his late grandfather and namesake, 1st Lt. Dale Bryant Shillington, USAF, a B-24 Liberator pilot in WWII, Dale earned a slot to attend Undergraduate Pilot Training (UPT). In May 2013, Dale was awarded his bachelor's degree in Mechanical Engineering, commissioned as a 2nd Lieutenant in the United States Air Force, and was assigned to Vance Air Force Base in Enid, OK, for UPT. After completing Initial Flight Screening (IFS) in Pueblo, CO, Dale returned to Vance to continue his training in the T-6 Texan II. Through his sheer determination, hard work, and dedication, Dale earned the opportunity to fly the T-38C Talon. Dale's passion for flying encouraged leadership to select Dale as a First Assignment Instructor Pilot (FAIP) for the T- 38C upon earning his pilot wings in August 2015.

In his short time in the Air Force, Dale was recognized for his effort and loyalty by receiving the Leadership Award and the Risner "Wingman" Award in his flight class JSUPT 15-13. In addition, he was awarded the Crane Award as the top pilot among 850 in the 2015 Pilot Instructor Training classes in San Antonio, TX. Dale married Courtney Elyse Moore on May 20, 2013 in Las Vegas, NV. The couple resided in Enid, OK. Together, they filled their weekends with backyard BBQ's with friends and family, trips to new places and DIY projects. They loved spending time with their dogs, Sadie and Sampson, who also participated in Dale and Courtney's marathon training. Dale's personality left a lasting impression on everyone who met him.  On July 21, 2016, Dale departed this earth doing what he loved, flying in an airplane.  Dale is survived by his wife, Courtney Shillington (Moore), parents Kevin and Sue Shillington (Carrow) of Sacramento, CA, brother Chad Higbie (wife Paula and son Harrison) of Lawrence, KS, sister Kristin Shillington of Niceville, FL, grandparents Jack and Nancy Carrow of Wellsville, KS, grandmother LaVonne Shillington of Manhattan, KS, his father in law and mother in law Allen and Paige Moore of Lawrence, KS, sister in law Lindsey Moore and fiance Brad Emge of Lansing, Il., along with many other aunts, uncles, cousins, and close friends.