For a man with a specialty in hypersonic aircraft systems, it is no surprise that Dr. Ryan Starkey “likes to go fast.” However, Dr. Starkey’s efforts to develop a drone, known as GoJett, that can travel at mach 1.4 (over 1,000 mph) is much less about ‘a need for speed,’ and more about creating a cost-effective test bed for supersonic aircraft systems. Starkey explains:

“Currently, there is no cost-effective way to test things that are traveling at high-subsonic and low-supersonic speeds. My goal is to create a [drone system] that facilitates wide-spread testing of these systems. If I can create an aircraft system that is $500,000, or even $1 million, it would be two orders of magnitude cheaper than the current test platforms.” 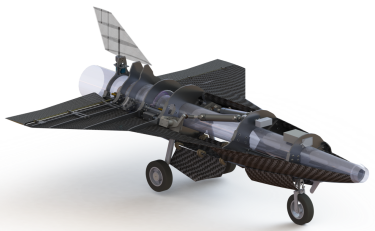 As a research faculty member at the University of Maryland, Dr. Starkey specialized in “hypersonic systems” – systems that travel at or faster than five times the speed of sound. There, he cultivated an expertise in propulsion-airframe integration and aircraft design optimization.

In 2007, Starkey joined the CU AES faculty, where he became an integral member of RECUV and the Director of the Busemann Advanced Concept (BAC) lab. Starkey explains the appeal of the RECUV community:

“In terms of RECUV, my work with supersonic drones is pretty stand-alone. I do, however, absorb and embrace RECUV’s knowledge with control systems and their best practices... The unmanned world is very busy here [at RECUV] and the opportunities are abundant.”

Though supersonic aircraft have existed since the 1940’s, Starkey and his team aim to be the first to miniaturize such technology. Such miniaturization is of great interest to the US Air Force (the project’s main sponsor) that hopes to use supersonic drones as cheap, semi-dispensable test-beds.

The “enabling piece” of hardware for Starkey’s aircraft miniaturization is the engine. The engine, which weighs less than 15 pounds, provides an “efficient small scale propulsion” system that is high thrust and low cost.

In addition to the propulsion system, GoJett is progressive for its implementation of a “tailless aircraft design.”  By decreasing drag, this design decreases the propulsion requirements of the aircraft, while improving its stealth. 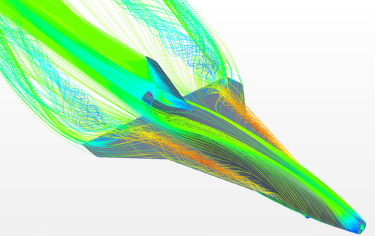 Model of airflow around GoJett.

“An autonomous system is a thinking system, while an automatic system does what it’s told. For our drone, it goes down an [internal] checklist and determines what to do under certain conditions. You have to tell it ‘if you’re off course, this is what you do’ or ‘if you’re running out of fuel, this is what you do.’”

Starkey’s team consists of graduate students enrolled in his Graduate Projects course, as well as a handful of undergraduates involved though Senior Projects. Though these students add an element of “fun” and “innovativeness” to the project, they also pose a challenge:

“We bring in new students every semester. It’s like trying to build an advanced state-of-the-art system using interns. The students are knowledgeable about aerospace, but it takes time to catch them up to speed. By the time they become proficient, they graduate.”

Despite the high rate of student turnover, the project is successfully making progress. Currently, the team is in the middle of flight system integration. The first flight of the supersonic drone system is scheduled for this upcoming fall semester.

For this first test, a “low-speed” test unit (that travels at around 300 mph) will be flown. The objective of this test unit will be to collect data that will be used to calibrate engineering design models. After successful calibration, a high-speed model, complete with the engine, will take flight at the UAS Flight Test Center in New Mexico. 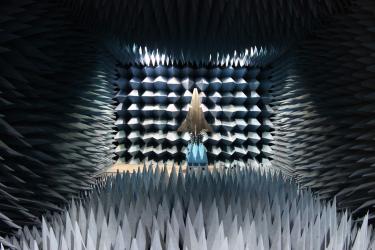 Prior to first flight, Starkey’s team will be addressing GoJett's final major technical challenge: the landing gear. Required to slow down a drone landing at a brisk 100 mph, the landing gear must survive a variety of high forces and torques.

As the first launch approaches, Starkey explains his mindset:

“This project is very inspirational and challenging. It is so challenging that it can be disheartening at times [for the students] because there are so many obstacles to overcome; but that just comes with doing something that no one has ever done before. So long as the first flight collects data [for calibrating models], even if it crashes upon landing, it will have been a success.”