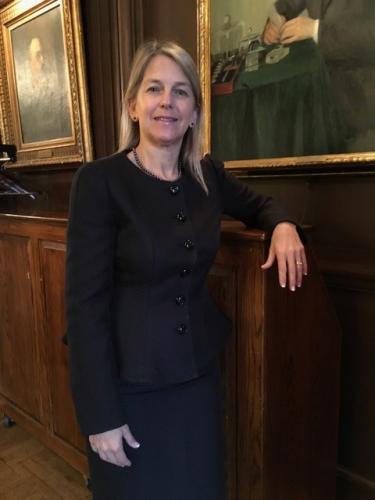 Dr. Newman is the Apollo Program Professor of Astronautics at the Massachusetts Institute of Technology (MIT) and a Harvard–MIT Health, Sciences, and Technology faculty member in Cambridge, MA. She is also a MacVicar Faculty Fellow (a chair for making significant contributions to undergraduate education); and was the former Director of the Technology and Policy Program at MIT (2003–2015); and Director of the MIT–Portugal Program (2011–2015). As the Director of MIT’s Technology and Policy Program (TPP), she led the Institute’s largest multidisciplinary graduate research program with over 1,200 alums. She has been a faculty leader in her home department of Aeronautics and Astronautics and MIT’s School of Engineering for 24 years.

The Honorable Dr. Dava Newman served as NASA Deputy Administrator from May 2015 through January 2017. She was nominated by President Barack Obama in November 2014 and again in January 2015 and confirmed by the U.S. Senate unanimously in April 2015. Along with the NASA Administrator, she was responsible for articulating the agency's vision, providing overall leadership and policy direction, and representing NASA to the Executive Office of the President, Congress, heads of federal government agencies, international space agencies, and industry. During NASA’s 58–year history, Dr. Newman was the first female engineer and scientist to serve as NASA Deputy Administrator, and she focused on articulating the human Journey to Mars, highlighting scientific missions, advocating for transformative aeronautics capabilities, developing and implementing a strategic innovation framework, and advocating for diversity and inclusion for NASA and the nation’s STEM initiatives by changing the conversation to include science, technology, engineering, arts, mathematics and design, or STEAMD. NASA’s novel public-private partnerships with several companies to develop new launch capabilities and exploration technologies are examples of disruptive innovation. Dr. Newman provided leadership and oversight for all NASA partnerships, including all US and over 800 international agreements with over 120 nations. She helped realize significant annual budget increases resulting in $19.3 B and $19.6 B USD budgets in FY16 and FY17 and provided instrumental leadership of NASA’s 17,500 civil servants and over 45,000 contractors in the immediate workforce.

Dr. Newman’s research expertise is in multidisciplinary aerospace biomedical engineering investigating human performance across the spectrum of gravity. She is a leader in advanced space suit design, dynamics and control of astronaut motion, leadership development, innovation and space policy. Newman was the principal investigator on 4 spaceflight missions. The Space Shuttle Dynamic Load Sensors (DLS) experiment measured astronaut-induced disturbances of the microgravity environment on mission STS-62. An advanced system, the Enhanced Dynamic Load Sensors experiment, flew on board the Russian Mir Space Station from 1996–1998. Dr. Newman was a Co-Investigator on the Mental Workload and Performance Experiment (MWPE) that flew to space on STS-42 to measure astronaut mental workload and fine motor control in microgravity. She also developed the MICR0-G space flight experiment to provide a novel sensor suite and study human adaptation in extreme environments. She is the MIT PI on the Gravity Loading Countermeasure Suit, or Skinsuit, onboard the International Space Station as an ESA technology demonstration 2015-2017. Best known for her second skin BioSuit™ planetary EVA system, her advanced spacesuits inventions are now being applied to “soft suits” to study and enhance locomotion on Earth. Newman is the author of Interactive Aerospace Engineering and Design, an introductory engineering textbook and has published more than 300 papers in journals and refereed conferences, and holds numerous compression technology patents. She has supervised 90 graduate student theses and supervised and mentored over 200 undergraduate researchers.

Select honors include the NASA Distinguished Service Medal (2017), Women in Aerospace Leadership Award (2017), the Aerospace Medical Association’s Henry L. Taylor Award for Outstanding Accomplishment in Aerospace Human Factors (2017), the University of Notre Dame College of Engineering Alumni Honor Award (2016), the AIAA National Capital Section's Barry M. Goldwater Education Award (2016), her patented BioSuit™ spacesuit system has been exhibited at: the Venice Biennial (2015); the American Museum of Natural History (2012); the Victoria and Albert and Museum, London (2012); the Paris City Museum of Science and Industry (2010), the London Museum of Science and Industry (2009); and the Metropolitan Museum of Art (2008). She was awarded Best Invention of 2007 by Time Magazine, named 100 Extraordinary Women Engineers in 2004, an AIAA Distinguished Lecturer, and the Women in Aerospace National Aerospace Educator Award (2001). Newman earned her Ph.D. in aerospace biomedical engineering, Master of Science degrees in aerospace engineering and technology and policy all from MIT, and her Bachelor of Science degree in aerospace engineering from the University of Notre Dame.